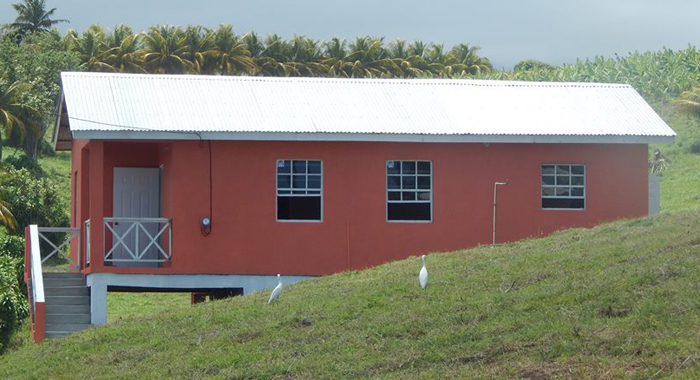 One of the houses given to disaster victims in Colonairie last Friday. (Photo” NBC Radio/Facebook)

The government on Monday handed over six houses in Caratal, Georgetown to families whose homes were destroyed by the December 2013 floods and landslides.

The event was the third distribution of houses and lands to persons by the government over the past few days.

The lands, the prices of which range between 10 and 50 cents per square foot, had been occupied by persons informally for decades.

Speaking at the event on Monday, Prime Minister Ralph Gonsalves said the project has so far costs the government EC$1 million.

Gonsalves, who is also Minister of Finance, said that the lands, which are yet to be paid for, is estimated at EC$600,000.

He said the used to be “in bush” and is owned by one section of the Crichton family, and payment will be made after the resolution of some matters.

Two of the houses are one-bedroom units, while the other four have two bedrooms each.

“We are putting inside the hands of people a two-bedroom house valued at 110,000 dollars. What a government! And for the one-bedroom, it will be 85,000 dollars,” he said.

“And each of these houses is far better accommodation that the persons who lost their houses in the storm and these houses are the gift of the people of St. Vincent and the Grenadines, acting through their government,” Gonsalves said.

“Now, not even in the great United States of American that you find this happening,” he said in reference to his government’s policy of rebuilding houses for victims of natural disasters.

“You have [Hurricane] Katrina in New Orleans, you have people who went in shelters, and if they stay beyond a certain time in the shelters — the same thing happen in New York City when you had that storm, Sandy — the federal government will send them a bill for the time they overstay in any shelter,” Gonsalves said.

Last Thursday the government distributed letter for occupants of 37 lots of land in Carapan to receive titles for their properties after paying the hugely discounted price.

And on Friday, the government handed over six houses to disaster victims and 31 letters of offer to “informal human settlers” in Colonairie, Gonsalves’ home village.

Gonsalves, speaking at the event in

“Housing is a fundamental human right and it is the duty of government to facilitate the provision of adequate housing at an affordable price,” he said.

“And I am not saying they are not, but I want us to widen our compass about human rights to include housing, among other things,” he said.