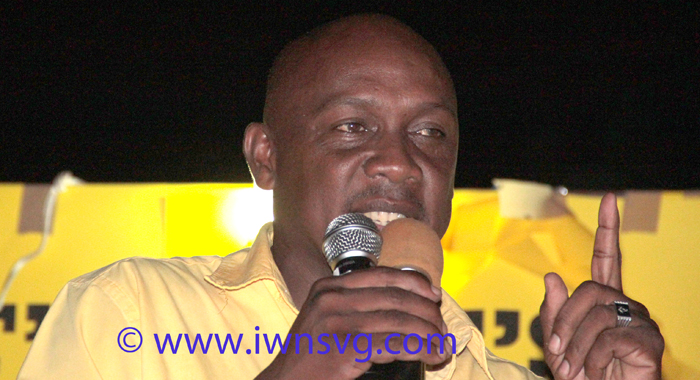 “This office that is set up in Sandy Bay is a sort of rallying force that will strengthen the ties between Lauron “Sharer” Baptiste and the entire constituency of North Windward,” Baptiste, a first time candidate, told the hundreds of party supporters at the event.

“You can come here and you will be able to talk to your loved ones in Canada and America for free. We will set that up … The school children, when given laptops, they can come here to do their research, to do their homework right here in this fulfilment centre,” he said.

The event also heard brief speeches from NDP president and Leader of the Opposition Arnhim Eustace, and former MP for North Windward, the NDP’s Monty Roberts.

But Baptiste noted that the event was the launch of one of two offices he will open in the constituency, and was not the launch of his election campaign.

He said another constituency office will be opened in Langley Park, adding that the crowd at the event was an indication that constituents are willing to partner with him to ensure that the NDP wins the North Windward.

General elections are widely expected this year, ahead of the March 28, 2014 constitutional deadline.

The ULP, which holds a one-seat majority in Parliament, is seeking a fourth consecutive term in office.

Baptiste will come up against the ruling Unity Labour Party’s Montgomery Daniel, who has been representing North Windward since 2001.

Baptiste said he will also open an office in Langley Park to reduce travel by constituents wishing to see him.

“So when the people of Sandy Bay want to see Sharer, they don’t have to travel to Rabacca. And when you go by the present MP, nobody has to tell you, ‘No office nah dey here yo know; go down ah Rabbaca.’

Baptiste noted his birth and upbringing in Sandy Bay and thanked the persons who contributed to his development, including his rise to national prominence in cricket.

“And I want to say to all the folks in Sandy Bay who have nurtured me, who have contributed to my success, I want to say thank you,” he said, mentioning among them nurse Sarah Baptiste who delivered him, and Fred Toppin and Francis May.

Baptiste recounted how he came to be a member of the national cricket team after Toppin invited him to join the Bridge Boy cricket club, since Baptiste was finding it hard making the Chatoyers team.

“The Chatoyers team was difficult to make so I used to always be like 12th man on that team,” he said.

He further recalled his first game with Toppin’s team

“When I arrived, Toppin gave me the new ball and he said, ‘Sharer bowl.’

“My emergence in politics is another call to service, to national service,” he told the gathering.

Batiste said that an NDP administration will create wealth in the constituency by revitalising the agricultural sector.

“When I look at this crowd tonight, I see millionaire over the next five years. You know why? Because the New Democratic Party, we are going to bring back the agricultural industry in this country. … You know that we have already outlined our plans for agriculture,” he said, adding that the NDP has said that it will rehabilitate 300 acres of bananas in its first year, if elected to office.

He said that farmers in St. Lucia, who have also been affected by the black sigatoka disease, are now getting $30 for a box of bananas.

He said the NDP has outlined its plans for education, agriculture, and tourism and will continue to outline its plans or other sectors and will launch its manifesto “very shortly”.

He suggested that there was mudslinging as the election campaign gains momentum, saying that in politics people like to throw a lot of dirt.

“But let me tell you something. You cannot judge the size of a tree by the seed. So the more dirt you throw on me, I will germinate and I will blossom and I will bear fruits for this constituency of North Windward,” he said.

Saturday’s event was heavy on entertainment, with persons dancing in the street to DJ music after the brief speeches.