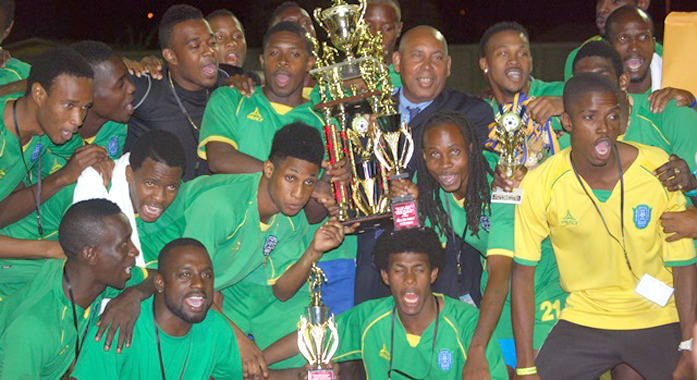 St. Vincent and the Grenadines became the first team in Windward Islands Football history to claim both the men’s and women’s title when their senior men’s team, known as “Vincy Heat”, outplayed all comers to win the 2015 edition of the tournament at the Philip Marcellin Grounds in Vieux Fort, St. Lucia.

They finished the tournament on a maximum nine points after beating Dominica 1-0 on Saturday closing night –their win adding to victories over Grenada (3-2) and host and defending champions St. Lucia (2-1) in earlier matches.

The men’s success complements that of the ladies (Lady Heat) who took the inaugural WIFA senior women’s title at the Victoria Park last month.

On Saturday, SVG (6 points) going into the final match against Dominica (4 points) needing to avoid defeat to take the title, continued the same brand of soccer, which had brought much success up to that point.

“The Heat” were boosted by the return of captain and team crankshaft Dorren Hamlet after his one match suspension for his red card against St. Lucia. The man making way was midfielder Damal “Rat” Francis, who failed to transfer his domestic form to the regional stage.

Coach Corneilius “Josie” Huggins began with the holding formation of 4-5-1 as happened in the opening period against St. Lucia. Even so, SVG, appeared the more forceful of the teams, came close to going ahead as early as the sixth minute when Myron Samuel collected a beautiful Emerald George pass ran into the area but was denied by a brilliant save by the Dominican ‘keeper, Glenson Prince.

Dominica, with the knowledge of requiring a win to be champions, mystifyingly showed little inclination to go forward and were prepared to sit in their half and wait.

But on 22nd minutes, the skill and determination of the Vincentians came to the fore, with what began with the tall defender Roy Richardson and included input from several players in putting together over a dozen passes. It culminated with “SVG’s Jewel” and tournament MVP George collecting a pass from Samuel, doing a “New Haven” on the defender before squaring for Samuel to bury the ball into the left hand corner of the goal-his fourth of the tournament.

The crowd, which had suffered with the disappointment of the hometeam, had apparently thrown their support behind the “Vincies” and erupted in appreciation of a well-waxed goal.

With coach Huggins reportedly marshalling his forces from the touchline the Vincentians were never allowed to relax and maintained more of the possession going into the half.

The SVG dominance continued for the most part unabated and with things looking comfortable, Juma Jilkes replaced the hardworking Kyle Edwards with a quarter of an hour to go.

But five minutes later, SVG almost brought the Dominicans back into contention when Richardson committed a cardinal error by playing the ball across in the defence which was picked up by a striker who shot wildly over the bar instead of advancing on goal.

SVG in the 85th minutes brought in Shavel Cunningham for the Nazir McBurnette whose workload had dropped markedly.

And that change almost brought dividends when Cunningham’s powerful 20 yard free-kick was tipped around the post by Prince with another royal save.

At the final, the Vincentians were singing and dancing their way through the presentation ceremony, linking hands and bowing to the 1000-strong capacity crowd.

SVG almost made a clean sweep at the presentation ceremony with goalkeeper, Winslow McDowall getting the Golden Glove award for best goalkeeper, Samuel got the Golden Boot for most goals and “SVG’s jewel” George got the MVP.

The three are also among eight Vincentians on the All-Tournament Team.

Dominica were awarded the Fair Play Award after collecting the fewest bookings.

In the opening match on Saturday, Grenada thanks to a a brace from 20-year-old striker Jamal Charles beat host St. Lucia 2-0.

One reply on “SVG are WIFA Men’s Football Champions”