Gonsalves says he’s not afraid; election will be in 2015 (+Video) 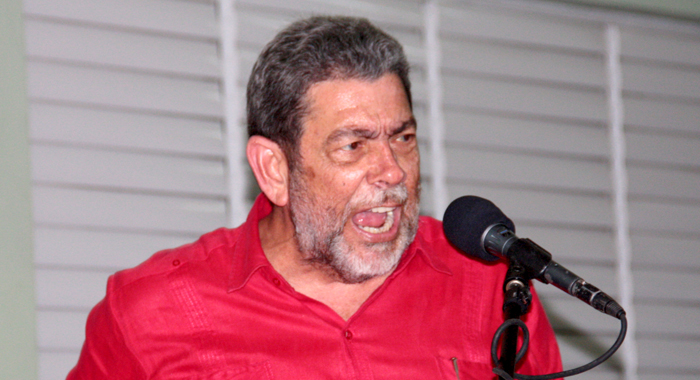 Prime Minister Ralph Gonsalves says he is not afraid to call the general elections, contrary to the taunts of his political opponents.

He told his Unity Labour Party (ULP) Women’s Arm Convention on Sunday that the elections will be this year, ahead of the March 2016 constitutional deadline, and listed the seats he thinks his party will win.

Gonsalves further described two opposition candidates as “fool” and “joke”, adding that the New Democratic Party (NDP) cannot win in those districts with these candidates.

“When the people of St. Vincent and the Grenadines elected us in December 2010, they say you have five years and you have three months grace.

“Well, unless there are some special reasons, I don’t want that three months grace in time, because in our hearts is the grace of love, and watch for me between now and the end of the year.

“And when they say what is the date, I put my hand up, my voting finger up to my father who is in heaven, following the advice of the ancient prophet who is Eli, speak lord, your servant Ralph is listening,” Gonsalves said to loud cheers at the convention.

“What we are seeing in the Labour Party is that the people, the members, the supporters, the country as a whole rallying behind Labour, and there is a mood, a rising mood,” he told the convention at which guest speaker former Member of Parliament Rene Baptiste said “the tides of the time are shifting” and called on party supporters to respond.

He again repeated the analogy of the Jews choosing Barabbas over Jesus.

Gonsalves said ULP supporters must ensure that young people in their home are registered to vote.

He said that the Supervisor of Elections has made it public that there are 9,000 new voters since the December 2010 general elections.

There are still more to be registered, Gonsalves said, adding that the NDP might have registered a maximum of 1,500 of these new voters, hence Leader of the Opposition Arnhim Eustace’s concern about the growth of the voter’s list since the last election.

To win general elections in St. Vincent and the Grenadines, a political party must amass at least eight of the 15 seats.

The ULP holds eight seats while the NDP won the remaining seven.

“In order to get eight, you have to come for it, and the eight which we have, nothing like NDP can take them,” Gonsalves said.

“They said they were coming for North Windward. You could run fool and come for North Windward? They say they are coming for Central Leeward, yo’ could run joke and get Central Leeward? So, in relation to those eight, the Unity Labour has put a sanitary cordon around them, where no virus from the NDP –” he said, the last of his words drown out by the loud response of the crowd.

“And that is why I tell you that it’s arithmetic. And then, in North Leeward and in South, we have excellent candidates and we are taking back those seats come this election,” he said.

Gonsalves said that in 2001 and 2005 the ULP won all the seats from North Windward to West St. George and North Leeward to West South Leeward, the “influence an impact of those 10” cause the party to win two of the West and Central Kingstown also.

“Ah want all thirteen on St. Vincent; ah want all thirteen. And I am telling you this, down in the Southern Grenadines, you know we beat them on Union Island, but they normally win us in Canouan and in Mayreau and get a small victory.

“But, this time, with the Canouan project coming back and with the Comrade’s role in bringing back that project, I am sure the people of Canouan will show their appreciation for the Comrade…” Gonsalves said.