‘The tides of the time are shifting,’ Rene tells ULP women 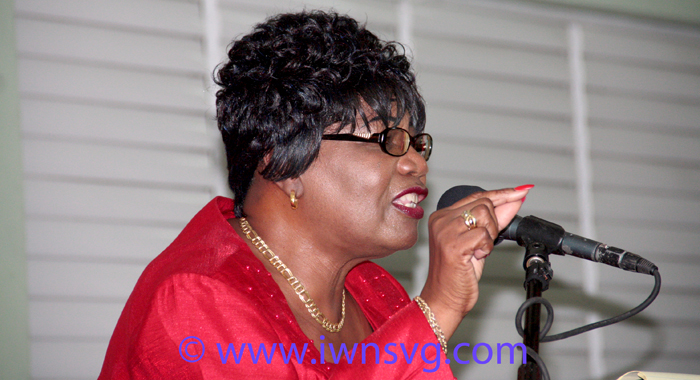 Women supporters of the ruling Unity Labour Party (ULP) were on Sunday called upon to respond to the “shifting” tides as the party prepares to seek a fourth consecutive term in office in general elections that Prime Minister Ralph Gonsalves reiterated will be held this year.

“Comrades, the tides of the time are shifting. We vowed we would not look back, we would not turn back, we would go forward with fervour to the future to build our beloved nation with faith, with a sense of resilience for which we are well known,” former Member of Parliament for West Kingstown, Rene Baptiste told the ULP Women’s Arm convention on Sunday.

Baptiste, who is a former minister of tourism and culture, was guest speaker at the event, which was held under the theme “Women! Make It Happen … Four Inna Row”.

She recounted the actions of party supporters leading up to the 2001 election, when the ULP first came to office, after 17 years of governance by the New Democratic Party.

“We rallied, we protested, we went north and south, east and west, public servants, teachers,” she said

“Who could forget the nurses in their white uniforms, standing outside Parliament and singing and chanting?” she said in reference to nurses protesting against proposed salary increases for MP under the NDP government, a bill that triggered civil unrest that what became known as the “Roadblock Revolution”.

“Have you forgotten? Don’t forget that the foundation you build on, you have to make sure it is firm and strong so that those who are coming now must know the history and must understand it. And do not cast aside persons who rallied and built and now, we have more work to do, because it’s a different century,” she said.

“This is how you will answer: from the east and from the west, from the north and from the south, we took the polls and the people and we built a government with fresh confidence. The breath of the people came as a wind in our sails and a new day dawned in our beloved land,” said Batiste who opted out of politics in 2010, after two terms as MP.

“The role of the women in every stage of the electoral campaign and the strategy that was deployed by the leadership for the Women’s Arm should never be underestimated,” she said.

“And you must become hard and firm in your support,” she said.

“You have to go out there and ensure that we bring in that victory.”

Baptiste spoke of the political landscape, which is now composed of the ULP and NDP, the two major political parties, and two minor parties, SVG Green Party and the Democratic Republican Party.

She said that under the ULP, the country is in a journey to success and prosperity, which is not yet complete.

“So don’t get weary. Tell me honestly and truthfully what you voted for in 2001, haven’t we delivered?” she said as she asked the convention to cross reference the party’s performance with its manifesto promises of 2001.

She spoke of low- and middle-income houses and now free houses being built for the less fortunate.

Baptiste also highlighted the West St. George Secondary School, where the rally was held, and asked the women if they had imagined that a secondary school would have been built in the constituency.

She said the country has a government that thinks about the needs of the people and the next generation.

“So the children — when the young man dream their dreams, it is for us in the leadership to make sure that we lay out the pathway for them so that they walk with confidence.

“As the Prime Minister says, they will mount up like eagles, we have to let them fly, and that is the purpose of this Unity Labour Party, and I know it is the women in the household who push the children, it is the women who hold their hands to write the ABC and their 123; it is the women in the PTA that move the school forward, and no doubt, there are women of Labour sitting among them,” Baptiste said .

Baptiste called on Labourite to heed the party’s message and guard the reins of power.

“I wonder why some of our comrades will harken and listen to some of the murky imagery that is portrayed before us. Under no circumstances must we relinquish our hold on government in exchange for that that you heard last Saturday night,” she said in reference to speeches at the launch of the NDP’s election campaign one week earlier.

“The Women’s Arm has a new role to play and I will tell you what it is going to be: We are going to be more proactive, more visible and more firm.

“General Secretary and Political Leader, I am respectfully requesting, and in a way demanding, that this role and focus must bring more prominence for all aspects of the political process in our party, not just on the radio programmes.

“I want us to be working together on the issues of living and production with the elected representatives. I have to see more prominence of some women who have valuable contributions to make at the level of consultation and policy making. More participation in governance, I want to see this backbone of the economy…” she said.

Baptiste noted the progress that women have made in certain professions

“Now, we ain’t just rocking the cradle, comrade sisters. We now [are] making the cradles,” she said, adding that she wants to see the beneficiaries of the housing and education revolution come and give back to the country in full measure.

She said the party can only win when supporters come together as one, with a unity of purpose.

“I want you to work harder than you worked in in 1998 and 2001 and those new voters that join us from year to year, I want to see every registration station in the next couple of month filled with young people lining up, brought there by the women in labour to register to vote…”

Baptiste told the gathering what she is anticipating come election night.

“On that night, failure is not an option, losing is not an option. What would prevent us from winning four in a row? You think about it carefully. … It is more than a song, it is more than waving a flag. … It is in our hands to find the solutions, make the amends, we too recognise as a governing party that there is a real difference that has to happen this time,” she said.

2 replies on “‘The tides of the time are shifting,’ Rene tells ULP women ”