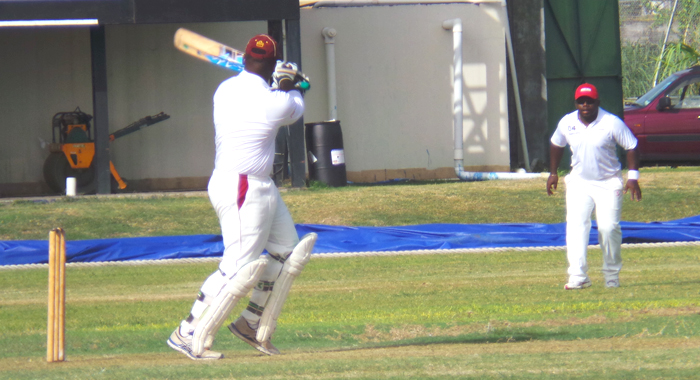 Jeron “Chubby” John pulls through the legside during his unbeaten 69 for Guardian General Saints.

Heading into the match needing an outright victory to keep themselves in contention if ever slightly to take the title from frontrunners and three times defending champions, Team Rivals, Saints took to the crease in good batting conditions and looked to be approaching a position of dominance when Vincent Cupid Jr. and Timothy Warner (28) had put on 58 for the opening partnership before Cupid went.

Warner went at 79/2 and Guardian General Saints went to tea in a position of authority at 135/3 in the context of local cricket.

But on the resumption a spate of wickets saw the scoreboard reading 168/7 with Dyke Cato picking up crucial wickets in the middle. It was left to Jeron “Chubby” Edwards and Damaul Phillips to join in unbroken eighth wicket partnership of 90, which gave them the luxury of declaring half an hour before the close.

John was unbeaten on 69, which included 4 fours and 6 meaty sixes, one of which went over the Mike Findlay Pavilion, while Phillips was on 31.

Lime Radcliffe who ended the day on 13 without loss batted obdurately for most of the second day looked in the hunt at 100/2.

But this quickly changed to 101/5. It required a 72 run sixth wicket stand between Marcus Castillo (55) and Urnel Thomas (28) to push Lime Radcliffe into the safety of avoiding the follow on and in with the possibility of challenging for first innings points. It ended when Thomas was LBW by Vis Tommy and the Lime Radcliffe effort quickly fizzled out as they went from 197 at the fall of the seventh wicket to be all out for 202.

Batting a second time and harbouring ideas of some quick runs for a possible declaration, Guardian General Saints were pegged back at 16/3 and were pulled out of trouble once more by John who was unbeaten on 30 when play was called and his team 84/5. Zane Edwards made 26.