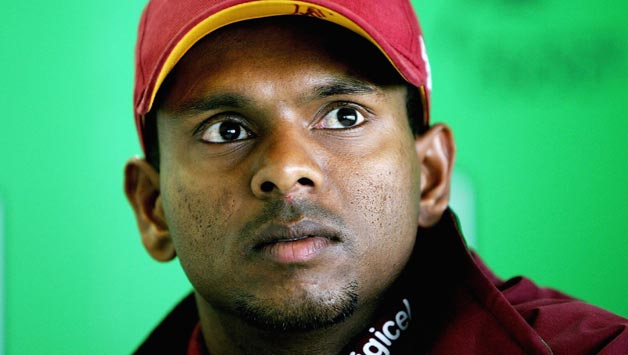 Chanderpaul’s form has declined and selectors have decided to look to the future. (Internet photo)

The West Indies Cricket selectors have given priority to form over emotions in dropping veteran middle-order batsman Shivnarine Chanderpaul for the upcoming test series against Australia starting June 3.

The Guyanese left-hander has been the mainstay of the West Indies batting for a major part of his 21-year international career.

Records show that he is 86 runs short of overtaking former batting maestro Brian Lara (11,953) as the all-time leading test run-scorer for West Indies.

But at 40, the player fondly known throughout the cricket world as “Tiger”, appears to have lost the once tenacious will to survive and remarkable powers of concentration.

This is borne out by the fact that Chanderpaul has compiled less than 200 runs in his last six Tests, at an average less than 20-something, highlighted by chairman of selectors, Clive Lloyd, who said the player’s form has declined and selectors had taken the decision to look to the future.

“Over a period of time, we have noticed a decline in his form and for the last 11 innings he has been averaging 16 and we thought the time had come to look towards the younger players,” Lloyd told journalists at a hurriedly planned media conference the Accra Hotel in Barbados.

Chanderpaul is said to have met recently with the West Indies Cricket Board (WICB) to discuss his future with the team but last week reports quoted board president Dave Cameron as saying that he was not privy to those discussions.

“Obviously, it is where he is at, and what are the next steps,” Cameron had said after the meeting.

“In another couple of days it will be made a lot clearer as to the end result of those discussions or how we go forward.”

Media reports said that following those statements, reports began to emerge that Chanderpaul had been dropped for the two-Test series against Australia.

A 12-man squad minus Chanderpaul was subsequently released by the WICB to begin preparations for the upcoming series.

The WICB indicated that Chanderpaul has been notified of his omission from the team, both verbally and in writing.

“This was a tough decision for the selection panel to make. We recognise the significant contribution Chanderpaul has made to the West Indies teams over the past two decades, but we want to take this opportunity to introduce a number of young, promising players to the squad,” Lloyd, is quoted as saying.

Chanderpaul has hit 30 Test centuries during his stellar career and has developed a great relationship with the West Indian public and it is probably because of this that many are said to be unhappy that he is not being given the opportunity to go out as the top West Indies run-getter in international cricket.

On Sunday evening some callers to one of the local radio sports programmes accused the WICB of “slapping Chanderpaul in his face” after all he has done for the team.

However, there were those who felt that it was time for the Guyanese to exit the scene not because of his age but as a result of his slump in form.

While it was hoped that the selectors may have been swayed to retain Chanderpaul purely on the basis of emotions and nostalgia, his omission from the squad appears to show that his chapter as an international player has ended.

Chanderpaul, who holds the unenviable record of the player who has been at the receiving of the most test defeats, also hold the records for the most not outs in test cricket. He, however, leaves on a winning note with the West Indies beating England by 5 wickets at the Kensington Oval in Barbados in the final test to draw the three match series 1-1.

In his debut test at the Antigua Recreation Ground, he partnered Lara when the Trinidadian scored a then world record 375 to go past the 36-year-old record of 365 held then by the great Sir Garry Sobers. Chanderpaul made an unbeaten 72 then.

However, he was later omitted for the series against Australia, which the West Indies lost 2-1 — and the position of the number one team in the world.

He is expected to be aptly recognised for his contribution by the WICB for his years as service, as hinted by president Cameron.

“I have never really liked how we have ushered out our players, so as President, I am always trying to figure out how to honour them,” Cameron told regional media.

“We’re doing it now on a continuous basis, year by year, for their performances, but at the end of a long and illustrious career like Shivnarine Chanderpaul’s, we want to ensure that whatever we do, it is well respected, and that he knows and the region knows how much we value his services to West Indies cricket.”

In addition to his 164 test matches, Chanderpaul played 268 ODI’s scoring 8,778 runs at an average of 41.31 with 11 centuries and 59 half centuries. It was during one of those 268 ODI’s that Chanderpaul endeared himself to the Vincentian public, when, in the fifth match of the series in 2002, the West Indies needing 15 off the final over to beat New Zealand at the Arnos Vale Playing Field, the lefthander, with a series of inventive strokes, saw his team home.

Although not a flamboyant batsman in the mould of Sir Vivian Richard, Gordon Greenidge or Brian Lara, Chanderpaul is still expected to be remembered is special way, one commentator said on radio.

The dropping of the former West Indies captain is expected to be accepted with some level of understanding by many from his native Guyana since it opens the way for his countryman and talented batsman, Leon Johnson. Johnson, a former West Indies U19 captain, has been named to lead the Board Eleven against the touring Australians from May 27 to 29.

One reply on “Chanderpaul dropped as selectors choose form over emotion”