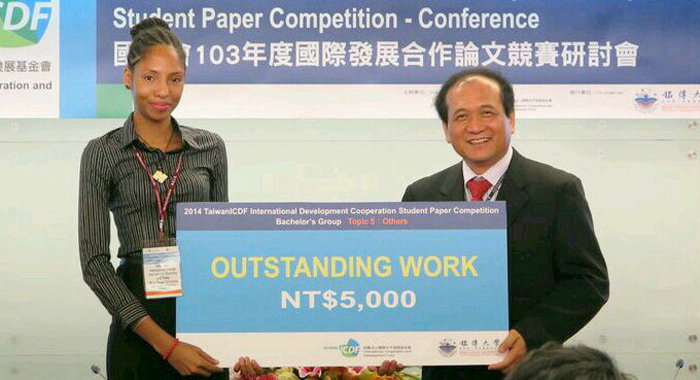 TAIPEI, Taiwan — Two St. Lucian students, who are now preparing for graduation from their respective universities in Taiwan, were amongst a group of young scholars who won prizes in a recently concluded student paper competition organized by the International Cooperation Development Fund (ICDF).

The competition rules asked students to present papers on their own topics, linking it “with TaiwanICDF issues of international development cooperation to provide experience and strength of Taiwan, which can be applied to allies or developing countries in their economic and social advancement”.

Participants were given five categories to choose from: Agriculture and Fishery, Business and Management, Engineering and Science, Public Health and Medicine and Others.

John entered the ‘Others’ category while Medouze entered the Agriculture and Fishery category.

In her paper, John proposed a vein pattern technology as a payment method, highlighting the fact that everywhere around the world countries are facing issues of a rise in security breaches within the homeland and financial service sectors (E-commence to be specific).

She explained that Taiwan, being more advanced due to its research, development and application in the technology sector, has implemented various technologies to combat this, including biometric technology in its airports’ immigration area, so the Asian nation may be able to help in this area.

“Several Caribbean states are now incorporating E-passports as their way of border control. However, the use of Biometric Vein Pattern Technology as a payment method has not yet been investigated nor has it been used by CARICOM as a tool in integrating its aim of single market and economy,” John wrote.

While presenting his finding he outlined that 180 brown laying hens were used in this experiment with six treatments, by three replications and 10 birds in each group.

“We wanted to see whether these by-products may carry a positive effect on hen performances and whether it may overall be profitable,” Medouze explained.

He concluded his paper by saying that the inclusion of MBH and marine algae can positively influence hen performances and egg qualities and which can improve the quantity in St. Lucia.

Their papers will soon be featured in the Journal of International Cooperation (JIC).