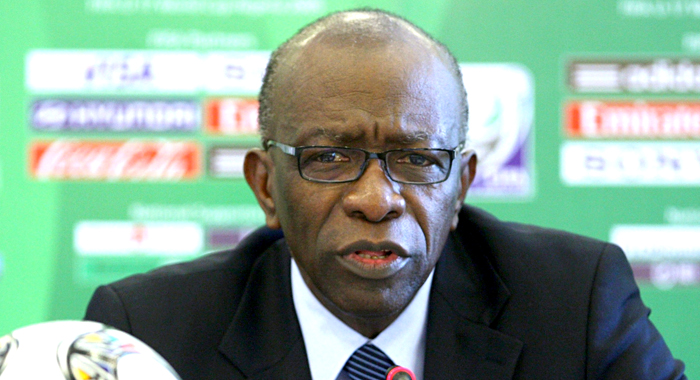 Reports say that as many as seven persons from CONCACAF, including incumbent president, Jeffrey Webb and former president Austin Jack Warner, have either been arrested or have been indicted over the last 48 hours on a number of charges.

The CONCACAF officials Jeffrey Webb — head of CONCACAF, and FIFA vice-president, Costa Rica’s national football chief, Eduardo Li, who was due to join FIFA’s executive committee on Friday, FIFA development officer Julio Rocha, from Nicaragua and Costas Takkas of the UK, an attaché to the CONCACAF president, were all arrested on Wednesday. Former president Warner was arrested in his native Trinidad and Tobago late on Wednesday afternoon.

Warner appeared in court in Port-of Spain, where a judge read eight counts against him and then set bail at 2.5 million Trinidadian dollars (US$395,000).

He was also told he must surrender his passport and report to police twice a week.

Warner did not enter a plea and was scheduled to appear in court again on July 12.

Police said there was a delay in processing Warner’s bail and he would spend one night in jail. Before turning himself in, Warner denied he had done anything wrong.

In addition to these, former CONCACAF General Secretary Chuck Blazer and two of Warner’s sons, Daryll and Daryan, were all slapped with football related criminal charges prior to the latest actions.

Blazer faces up to 15 years in prison after secretly pleading guilty in 2013 to a series of charges, including racketeering, wire fraud, money laundering and income tax evasion.

But reports say that his sentence is likely to be substantially reduced in return for his role as a cooperating witness in the plea deal.

Reports say Blazer was the long-time deputy to Jack Warner at CONCACAF, football’s regional governing body, but the two men later fell out. He allegedly received $750,000 from the South African government in return for backing its 2010 World Cup bid.

Reports said that Blazer was a larger than life figure who enjoyed the high life, renting an apartment for his cats next to his Manhattan penthouse, as he earned a reported US$21 million in fees, commissions and pay from CONCACAF.

“The indictment alleges corruption that is rampant, systemic, and deep-rooted both abroad and here in the United States,” said US Attorney General Loretta Lynch at a media conference following arrest of the FIFA officials.

Both Swiss and U.S. justice officials said the indicted officials had allegedly received US$150 million worth of bribes from the early 1990s for football tournaments in the United States and Latin America.

The alleged crimes were agreed to and prepared in the United States via U.S. bank accounts, the office of the Swiss prosecutor said. Justice Department officials said that the officials who were arrested in Zurich as well as Warner will be extradited to the United States to face the charges.

The United States has two months to issue a formal extradition request, according to Trinidad’s attorney general, Garvin Nicholas, who said his office had been working with the U.S. justice department for about two years regarding the investigation into Warner.

In 2011, reports said that Webb and a number of other CONCACAF officials were said to have joined together in helping to oust Warner over what they said were corrupt practices. But four years later, Webb and Warner were simultaneously spending time in custody both facing similar criminal charges.

The Swiss federal prosecutor also raided FIFA’s headquarters in Zurich in a parallel investigation into the controversial bidding race for the 2018 and 2022 World Cups, which were awarded to Russia and Qatar respectively in December 2010. FBI Agents were also seen removing materials and documents from CONCACAF’s New York Headquarters during the course of the day.

In St. Vincent, Dr. Adrian Fraser, a former president of the St. Vincent and the Grenadines Football Federation (SVGFF), said he is not surprised about the situation with events affecting FIFA over the last few days, but is surprised that it took so long to happen.

Fraser said that the information in the media about FIFA over the last few years spoke of a high level of corruption and it was only a matter of time before “the boli burst,” he said, using a local expression referring to the unwinding of an unpleasant situation.

“There was so much being said about the organisation and some of its leading officials that you always believe that something had to give sooner or later. So what happened over the last few hours was always a possibility,” Fraser said.

Fraser, one of the country’s most respected historians, was at the head of local football for one term in the 1990s.

He said that while at the helm of the SVGFF, he encountered some situations while dealing with certain CONCACAF officials that left him feeling a little uncomfortable and with no desire to deal with those persons again.

In 2011, some SVG officials along with others from the Caribbean were accused of accepting US$40,000 as bribes for their vote from then presidential candidate Bin Hamman.

Fraser said he is a bit puzzled as to how, amid all the arrest and corruption charges, FIFA’s 79-year-old president, Sepp Blatter, who is seeking a fifth term, is untouched. He also is of the opinion that the elections, scheduled for Friday, should be postponed amid all the problems and negative publicity.

But Blatter, who is being challenged by Jordan’s Prince Bin Ali, stated on Thursday that the meeting will go ahead.