Was ‘Bing’ Joseph driving without ever having a licence? 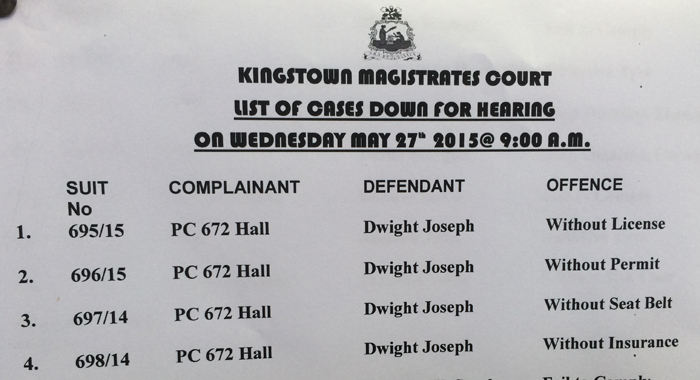 A photo of the charge sheet as displayed outside the court. (IWN photo)

I-Witness News understands that police would charge someone for driving without a permit if they were never issued a driver’s licence.

“What I can tell you in that respect is that Dwight was in fact stopped by the police and we are carrying out some investigations. That’s all I will say on that really,” Charles told I-Witness News on Thursday.

Information reaching I-Witness News say that the police have not found in their records any information suggesting that Joseph, also known as “Fly Guy”, was ever issued a driver’s licence.

Ask if that is the case, the police chief said, “I actually wouldn’t go into that. I can talk to you later in that regard.”

Joseph told I-Witness News on Thursday that he did not wish to comment.

“I have absolutely no comment on this matter; absolutely none at all,” he said when asked if it was in fact true that he had been driving without ever having been issued a licence.

When the case was called at the Kingstown Magistrate Court on Wednesday, Magistrate Carla James said she understood that the charges were being withdrawn and the prosecutor responded in the affirmative.

No reasons were given in court for the withdrawal of the charges, and when asked to comment on Wednesday, Head of the Traffic Branch, Superintendent of Police Kenneth John, referred I-Witness News to the police chief.

A source familiar with the development told I-Witness News that Joseph was stopped as officers conducted checks on vehicles as part of a clampdown operation.

The source said that a young officer stopped Joseph and asked to inspect his driver’s licence.

The law requires that persons have their driver’s licences with them at all time when driving a vehicle.

The source said that Joseph got annoyed and asked the police officer if he had something against him.

Checks by the Traffic Department resulted in the charges being brought against Joseph.

At least one person who observed the court proceedings on Wednesday expressed surprise that the charges against Joseph were withdrawn, pointing out that six other persons had to pay over $1,200 each for various traffic offences that same day.

4 replies on “Was ‘Bing’ Joseph driving without ever having a licence?”