Lawyer writes principal after student is barred from graduation 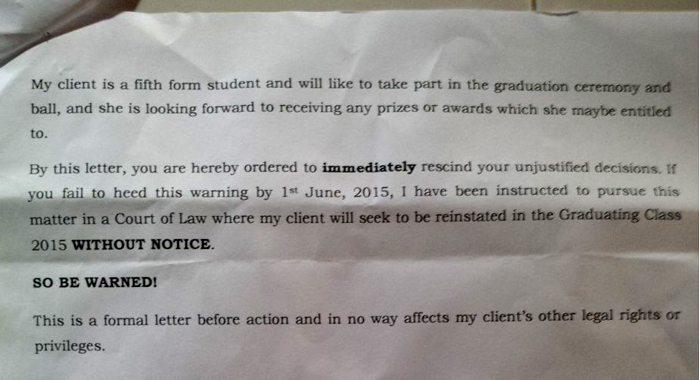 A lawyer has written to Principal of the Union Island Secondary School (UISS), giving her until June 1, 2015 to rescind a decision barring a student from participating in the July 1, 2015 graduation ceremony and ball or face legal action.

Mathias M.K. Stewart’s letter of 26 May 2015 to principal Vernette Ollivierre was in response to an undated letter that she sent to the mother of the student, informing her that her daughter, a fifth form student, “would not be graduating with the class of 2015”.

“The school’s Graduation Policy, which is attached, stipulates that a graduating student should have living arrangement appropriate to a school child. Since this applies to her, [your daughter] would thus not participate in the ceremony or ball on the 1st July. She has also forfeited eligibility for any prizes or awards,” Ollivierre wrote in the letter.

She said that the student would be able to collect her school’s certificate from the main office at a cost of EC$30.

“She would also collect, when they are available, her CDC CSEC slip and certificate.

“We wish [her] all the best in her future endeavors and success in her CDC CSEC exams,” the principal wrote.

The school’s “Graduation Policy” says that the criteria for graduating from the school are as follows:

Completion of ALL School Based Assessments for registered CSEC subject

The policy also said that a student who in the opinion of the school rules does not adequately satisfy the criteria will not be allowed to graduate and will not be eligible to receive prices and attend the ball.

It also says that parents/guardians of students who are not eligible to graduate will be informed by letter at least one month prior to graduation.

In his letter, Stewart said that this client did not violate the school’s graduation policy “as she is currently and has always been living with her parents at Clifton Inion Island in the Family Home.

“However, for the month of March 2015, my client and her parents stayed on a boat in Clifton harbour while their house was being repaired,“ the lawyer said.

“Further, your conclusion are baseless and the sanctions imposed upon my client are unjustified, and downright unjust,” he further said in the letter to the principal.

“You failed to indicate how you arrived at such a decision. There is no mention of any investigation into the matter by you or the Social Welfare Department located at Clifton Union Island or any visit to my client’s home to converse with her parents.

“My client is a fifth form student and will like to take part in the graduation ceremony and ball, and she is looking forward to receiving any prizes or awards which she may be entitled to.

“By this letter, you are hereby ordered to immediately rescind your unjustified decisions. If you hail to heed this warning by 1st June, 2015, I have been instructed to pursue this matter in a Court of Law where my client will see to be reinstated in the Graduating Class 2015 without notice,” Steward wrote

“This is a formal letter before action and in no way affects my client’s other legal rights or privileges,” he said.

The student is one of several across the country who have been barred from participating in their schools’ graduation exercises for a number of reasons which vary from school to school.

I-Witness News was unsuccessful in its attempts to reach the Ministry of Education for comment on Thursday.

Repeated call to the relevant education official went unanswered as the line was busy.