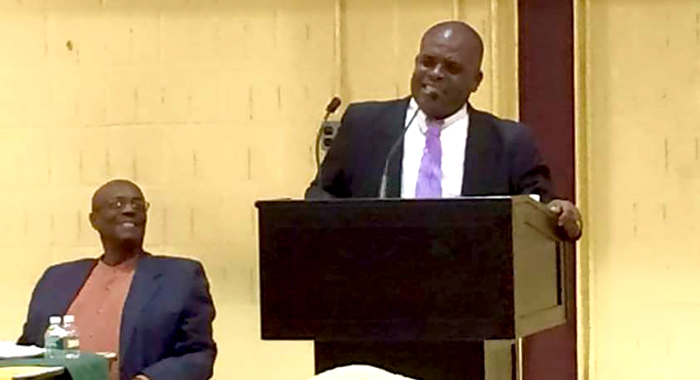 NEW YORK — Member of Parliament for North Leeward in St. Vincent and the Grenadines Roland “Patel” Matthews told Vincentians in New York Sunday night that the ruling Unity Labour Party (ULP) has abandoned the constituency and is denying students the option of pursuing certain careers.

“… today, after 15 years in office or thereabout, infrastructure in North Leeward has deteriorated. Our town of Chateaubelair is a village. I say a village because it is rundown,” he said of the only of SVG’s six towns that is located in North Leeward.

“That is why I say here tonight, you folks from North Leeward, I know you have something in the kitty somewhere to reinvest in your community,” said Matthews, who is seeking a second consecutive term as MP for the area.

He said public transportation in North Leeward is “a living hell”.

“Up to today the students who go to Troumaca Secondary School and to Petit Bordel Secondary School cannot aspire to be a doctor, an engineer. In this era, in an education revolution, no chemistry, no physics, no biology is being taught in any of the secondary schools in North Leeward. We have to change that. The New Democratic Party will change that. Patel Matthews will be a part of that change,” said Matthews, a former teacher.

He said that while the ULP has accused the NDP of not doing anything in its 17 years in office, the NDP constructed a new district hospital in Chateaubelair.

He said that after 14 years of the ULP, there is no sustainable industry for the creation of wealth and employment in villages in North Leeward.

“The problem is elsewhere too, but I said I am giving a focus on North Leeward,” he said at the town hall meeting that was also addressed by Leader of the Opposition, NDP president Arnhim Eustace, and former works minister under the NDP, engineer Glenford Stewart.

He said the situation exists notwithstanding agriculture and tourism potential in North Leeward.

“Our constituency, when it comes to mainland St. Vincent, has the best potential for agro tourism development. We have some of the best waterfalls — most beautiful, Trinity Falls, Falls of Baliene, Dark View Falls, Petit Bordel Waterfalls, but we are not capitalising on what we have to get what we want, because the present administration lacks the vision in understanding what is required for upward mobility of small, rural communities,” Matthew said.

He said there are persons from a major university in the Netherlands who go to North Leeward and do their practicum on farms there.

“So we have potential. Universities are willing to send their students into North Leeward to do their master’s degrees,” Matthews said.

“The point I am making, you know, we have the potential in North Leeward; we can be self-sufficient. We have good farmers; the best fisherfolk are from that part of the island, but we are not making the money that we can make…”

He said the NDP promises “a new approach”, which includes a development bank to ensure that small farmers, fisherfolk and budding entrepreneurs get the opportunity to be self-sufficient through low-interest loans.

“Today, to access loans in St. Vincent as a young person, it is next to impossible. You come up with a good idea, a good business plan, but if you don’t have somebody to sign some document for you, or if your family doesn’t have some title deed to lend you, you can consider your options gone.

“Brothers and sister, our St. Vincent and the Grenadines, our Hairouna, our Yurumein, we have to do better,” he said, using two of SVG’s indigenous names.

Matthews is being challenged by the ULP’s Carlos James, a lawyer and political newcomer, who was also in New York on the weekend at a fundraiser.