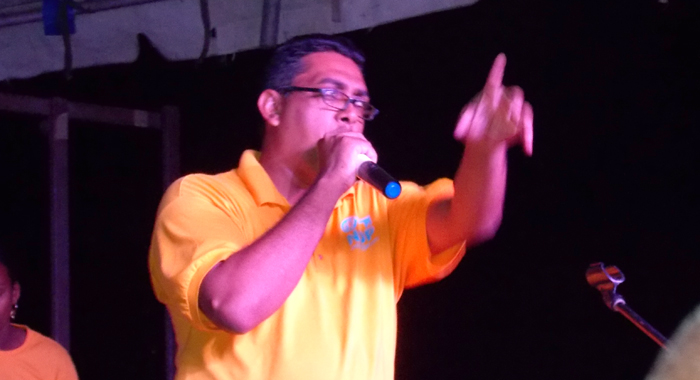 The main opposition New Democratic Party’s (NDP) candidate for Marriaqua in the next general elections has likened the ruling Unity Labour Party’s (ULP) treatment of the constituency to the treatment meted out to indigenous Vincentians at the hands of the British more than 200 years ago.

“My brothers and sisters, we the people of Marriaqua deserve better, and it is time for us to vote for positive change. It is time for us to move away from the Unity Labour Party and usher in the New Democratic Party,” said Bowman, who will make his second bid to become parliamentary representative for Marriaqua.

He will come up against the ULP’s Jimmy Prince, a first-time contender, who has replaced Deputy Prime Minister Girlyn Miguel, who has been MP for the constituency since 1998.

“… my brothers and sisters, the only way that we can have change in this country and in this constituency is to have Curtis Bowman, your representative for Marriaqua and honourable Arnhim Ulric Eustace your next prime minister of St. Vincent and the Grenadines,” Bowman said.

He said that under the ULP, which came to office in 2001, there has been a decline in many sectors, including agriculture, manufacturing, construction, and tourism.

Bowman, a pharmacist, said the people of Marriaqua don’t want hands out.

“We the people of Marriaqua need jobs,” he said and promised that an NDP administration will provide employment.

Bowman outlined some of his plans and programmes for the district.

He noted that agriculture is the main sector in the constituency, but said under the ULP agriculture has taken a nosedive.

“So the Unity Labour Party has made the banana farmers and all the other farmers in this country beggars.”

He said the NDP will revive the banana industry and will in its first year replant over 1,000 acres of bananas.

“And I tell you that is good news for the farmers of the Marriaqua constituency,” Bowman said, adding that NDP leader Arnhim Eustace has said that farmers will get income support while the 1,000 acres is being replanted.

He said the La Criox Palletisation Plant has become a venue for fetes instead of the processing of agricultural produce.

“My brothers and sister, the farmers of Marriaqua, it was built for you. … And I want to tell you that the New Democratic Party and Curtis Bowman as your representative have big plans for that building right there in La Criox.”

Bowman said he has already spoken to a consultant who is putting together a programme for the formation of a cooperative for the boxing plant.

He said when the ULP won the election it took away the Banana Growers Association from farmers, and pledged that the NDP will return the building to farmers, and will open an agriculture input outlet for farmers.

“My thing is that I am not going to look at the farmers one-sidedly. It is a holistic approach,” Bowman said, adding that an NDP administration will also provide market for agricultural produce.

Regarding the road network, Bowman said the roads in the constituency are “the worst in living memory” and pledged to continue the work of former Marriaqua representative under the NDP, Bernard Wyllie.

“Bernard Wyllie, he put roads where roads were impossible to go,” Bowman said.

He said the road leading to the Montreal Gardens is so bad that the owner of the property has closed it and gone overseas.

“He (property owner) said to me he offered them money and they refused. What a wicked government! But I want to say to the people of Marriaqua, keep faith. With Curtis Bowman and Arnhim Eustace, we will ensure that the roads in Marriaqua and [by] extension St. Vincent and the Grenadines are properly taken care of…

“It is not an easy task, but we, under the leadership of Mr. Eustace, are ready. We are ready with your support,” he said.

He also pointed out that the section of the road in Belmont that collapsed two years ago is yet to be repaired.

“And that is disrespect for the people of Marriaqua. And at the same time, you have the government fixing one road somewhere up in Gorse that only servicing one person,” he said and pledged that an NDP administration will repair the road.

Bowman also said that an NDP government will ensure that healthcare service is available, accessible and affordable to all constituents.

“Gone will be the days when you go right here at the Richland Park Clinic and you can’t get your medication. … I had a talk with my leader and he said when we are elected and he becomes the prime minister of St. Vincent and the Grenadines, he will ensure that the basic medical needs are met for every single Vincentian,” Bowman said.

He, however, noted that the Levi Latham Health Centre is being upgraded, but added that it makes no sense to have a fancy building and persons are not able to check blood pressure and sugar levels.

Bowman said that if elected to office, the NDP will ensure that the polyclinic is completed and provides primary health care.

“My brothers and sister, listen to me tonight, listen to me. Do you think that all what I out outlined there is possible under the Unity Labour Party? These things are only possible with Curtis Bowman as your representative and Arnhim Eustace as the prime minister of St. Vincent and the Grenadines,” he told the rally.

“It is time for us; it is time for the people of Marriaqua to make a change and to make that positive change when you go to the polls come the next election in St. Vincent and the Grenadines.

“My friends, I believe this country will reclaim its promise. Like I said, for 15 years, Girlyn Miguel and the Unity Labour Party has placed us in economic exile, but I want to say out of this long economic exile, a brighter day will come,” Bowman said.