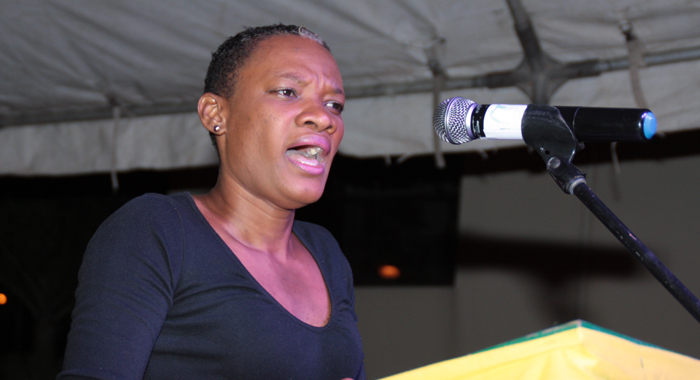 Laverne “Gypsy” Phillips on Saturday responded to those who branded her ‘ungrateful’ for supporting the NDP. (Photo: Zavique Morris-Chance/IWN)

So said Phillips on Saturday as he fired back at the persons who accused her of being ungrateful for campaigning on behalf of the main opposition New Democratic Party (NDP).

“I am not a product of what they are boasting about. I am a product of a former government, an NDP government, who ensured that I was able to read and write efficiently before I enter secondary school,” Phillips said at an NDP rally in Layou on Saturday.

Phillips mounted the NDP’s platform on June 6 and endorsed Curtis Bowman as the next area representative for Marriaqua.

She said the ULP’s Girlyn Miguel, who has been MP for the area since 1998, has failed to represent the interest of the constituency.

But supporters of the ULP, including a caller to the party’s station who identified herself as Phillips’ mother, have accused her of being ungrateful, noting that she received a university scholarship under the ULP administration.

In 2006, Phillips received a five-year scholarship from the government of Taiwan under a programme through which the Asian nation funded the post-secondary education of citizens of its diplomatic allies.

The scholarship provided for one year’s study of Mandarin Chinese and a four-year undergraduate degree.

Phillips completed her studies in 2011, earning a Bachelor of Arts in international business.

She responded to her critics at an NDP rally in Layou on Saturday and told party supporters how she came to receive the scholarship to study in Taiwan. (See video)

Phillips said that after her political debut in her home constituency, “the ULP guns came out blazing.

“But I’m not worried about them; they need to do so much more to ruffle my feathers,” she said.

“As a young woman now entering the field of politics, I will, however, let them know that I am a batswoman. So whether they bowl a spin, a fast ball or a googly, I will hit it out of the park, send them to fetch it and tell them to bowl again. So whether it’s 20 overs, 50 overs or test match, I’m ready for any version of the game,” she said and went on to elaborate her concerns about the state of affairs in St. Vincent and the Grenadines. (see video)

She noted the NDP’s promise of ensuring that at least one person in every household is employed.

“I am aware that the government would not be able to create jobs for all of us, but at least they should be empowering us and providing the opportunities that will let us fend for ourselves.

“My youths, do not stifle your conscience. Are you seeing this happening under a ULP government? Youths, it’s time for us to take this country back so let us elect a government who in interested in looking out for our best interest. And that, my youths, is a New Democratic Party government,” Phillips said.