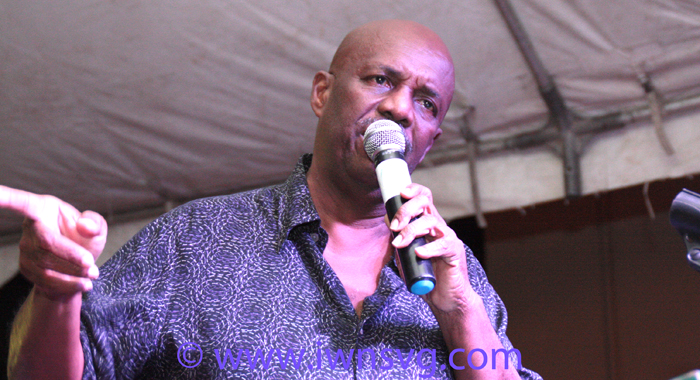 Leader of the Opposition Arnhim Eustace says he will ask Prime Minister Ralph Gonsalves to tell Parliament why charges have not been brought against a senior police officer who allegedly received stolen good.

A source tells I-Witness News that not only was stolen good reportedly recovered from the officer’s house, but the officer also allegedly called a police station and instructed them to release a suspect, who is one of the officer’s relatives.

Eustace spoke about the situation at the New Democratic Party’s rally in Layou on Saturday, saying that a man had burglarised a number of homes in the Peruvian Vale area.

“I want the Prime Minister of St. Vincent and the Grenadines, in his capacity as Minister of National Security, to tell me why that senior police officer, receiving stolen goods, which the police get back, has not been charged.

“I am going to put that question to the Parliament next week. I want an answer, the New Democratic Party wants an answer as to why something like that could happen,” Eustace said.

“Other people who have done little or nothing have had to face the courts, pay fines, most of them go to jail and you have a senior [police officer] having received and handed to the police stolen goods,” he said.

“I am asking the Prime Minister and Minister of Finance and National Security to deal with this matter. That police should face the court like anybody else. In this society like our, that type of crime and people at that level is unacceptable.

“It is unacceptable for anybody, far less for somebody to belong to the Police Force. And nothing has happened. The goods have been handed back and nothing has happened. She is not charged, the fella is not charged; none of them have been charged and I am saying to you tonight, I am asking Prime Minister Gonsalves, I’m asking the Commissioner of Police to explain why there is no charge,” Eustace said.

“I am not joking about this matter. It is part of the thing we are talking about when we say we have to deal harshly with the question of crime in our country. We can’t have one set of laws for one set of people. The law must apply to all the people of St. Vincent and the Grenadines and this is a very serious matter,” he said.

A former police officer, Jeffrey Garraway, a resident of Marriaqua, is among the persons whose home the senior police officer’s relative is said to have burglarised.

Garraway, who lives overseas, told The News newspaper last week that his home was burglarised in December.

He told the publication that the police had in custody a suspect who admitted to the crime but released him without charge.

Garraway told the newspaper that a high-ranking officer was involved in handling at least one item that was stolen from his house.

He said the senior police officer is related to the suspect and they returned a television to investigators during the investigation.

Commissioner of Police Michael Charles has described the allegation as “utter nonsense”.