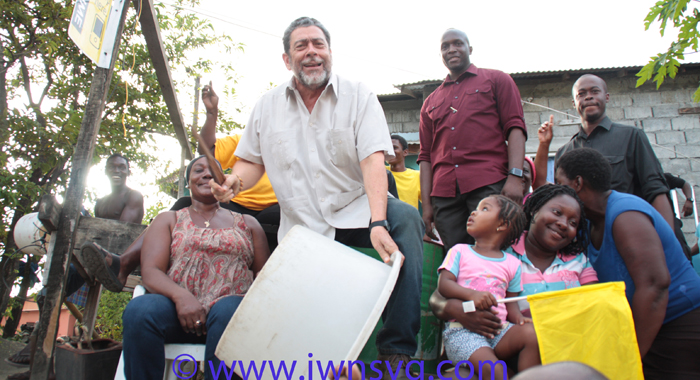 PM Dr. Ralph Gonsalves beats a “drum” and shouts “Labour” in Fitz Hughes on Friday as protestors and his bodyguards look on. (Photo: Zavique Morris-Chance/IWN)

Prime Minister Ralph Gonsalves was both jeered and celebrated in Fitz Hughes on Friday when he arrived to pull a ribbon, along with Major Manuel Querembas of Ecuador, to open officially a bridge built by that South American nation’s Army Corps of Engineers.

Earlier on Friday, paint was used to blot out the letters “NDP” which was written on the Bailey bridge, which replaced a concrete and steel bridge that collapsed during the December 2013 floods.

NDP is generally understood as a contraction of “New Democratic Party”, the main opposition party in St. Vincent and the Grenadines, which traditionally gets majority support in Fitz Hughes.

The bridge was one of three in North Leeward, funded and built by Ecuador that were officially opened on Friday.

The two others are located in Sharpes, and Plan in Chateaubelair.

I-Witness News visited Fitz Hughes some hours before the Prime Minister’s arrival, where some residents where dressed in yellow, the colour of the NDP, and the party’s campaign t-shirts, while others wore red, the colour of Gonsalves’ Unity Labour Party.

A number of NDP campaign t-shirts, including at least one bearing the face of MP for North Leeward, the NDP’s Roland “Patel” Matthews, were strung on a line high above head on one section of the road.

Villagers bantered each other about their political support in a lively, but respectful manner, with some of those advocating for the NDP accusing those shouting ULP slogans of actually being NDP supporters.

“Watch so much idlers on the block. What Labour have (sic) to give alyo? Nothing!” she said.

Villagers told I-Witness that they were ready to vote.

“We hear the Prime Minister is coming here and we the people of Fitz Hughes want the election to call right now, because watch so many young people on the block with nothing to do. We want a change,” one woman told I-Witness News.

General elections are constitutionally due in March 2016.

When this was pointed out to residents, another woman responded, “The Constitution nah been contain that when Ralph Gonsalves demanded election before ye time?” — a reference to the “Roadblock Revolution” of 2000 that shortened the life of the NDP administration and forced early elections.

Gonsalves has said that Vincentians will elect a new government before the end of 2015.

“Ecuadorian Bridge! Ecuadorian Bridge! I feel nice and happy because we have a bridge to come into our little community. Everybody must live happy and be together as one,” another woman, a few feet away, told I-Witness News.

A man told I-Witness News that he is glad that the bridge was build, adding that none of them who were “campaigning” on Friday had gotten work on the bridge, but were happy that it was built.

The man told I-Witness News that he thinks it was “foolishness” to have painted “NDP” on the bridge ahead of the formal opening.

“They shudda wait until everything done. Gonsalves supposed to come and cut the ribbon. They shouldn’t mark up nothing; they shudda wait,” he said.

The man, who had changed into a ULP t-shirt by the time Gonsalves arrived later that afternoon, added that after the formalities, residents could have painted the bridge in any colour they wanted.

A woman told I-Witness News that the Ecuadorians “claimed” that they did not get any help from the Government of SVG or Gonsalves.

The Ecuadorian government agreed to build the bridge when Gonsalves visited Quito in the aftermath of the severe weather that destroyed the initial river crossing.

“Bridge nah come from Ecuador. Bridge come from St. Lucia since February last year,” one woman said in an apparent reference to the steel structure of the bridge, some of which was donated by St. Lucia several months before the Ecuadorian team arrived.

In addition to assembling the Bailey Bridges, Ecuador funded and constructed the abuttments and river defences at a cost of US$3.7 million.

Another woman told I-Witness News that she agreed with “NDP” being painted on the bridge because Labour supporters were saying it was a Labour bridge, although the billboard erected nearly clearly says it was funded by Ecuador.

Speaking during the opening ceremony, Gonsalves said the opposition has opposed the construction of the bridges and gave no help at all.

“No moral support; nothing. But then, some people in the opposition, clearly with the connivance of the leadership of the opposition, gone and do something which I consider a besmirching of the goodness and godliness of the people of North Leeward, by completely indecent and ungrateful, disrespectful … to go and paint up the place in yellow,” he said.

“My answer to their assault on goodness and godliness is very simple,” Gonsalves said, and sang the chorus “I’m building a bridge”.

“And nobody could disturb God plan,” Gonsalves said at the end of his singing.

When he arrived in Fitz Hughes Friday evening, Gonslaves was greeted by persons beating makeshift drums and blowing a conch shell in protest, while other chanted support for him.

The Prime Minister, escorted by several members of his security detail along with members of the Rapid Response Unit, a tactical unit of the Police Force, walked into the yard where some women were beating the makeshift drums, took the stick from one of them, started beating the large container she was using as a drum, shouting “Labour! Labour!” to the amusement of the women and other persons. (See video at end)

He exchanged pleasantries with persons before proceeding back to the bridge, amidst supporters shouting “Labour”, to pull the ribbon to open the bridge formally.

The fourth bridge constructed by the Ecuadorians, located in Hope, Penniston, will be officially opened on Monday.

(I-Witness News apologies for the quality of the sound in this video. Scroll for photo album)