Car tried to overtake before plunging over cliff, killing 3 — witnesses 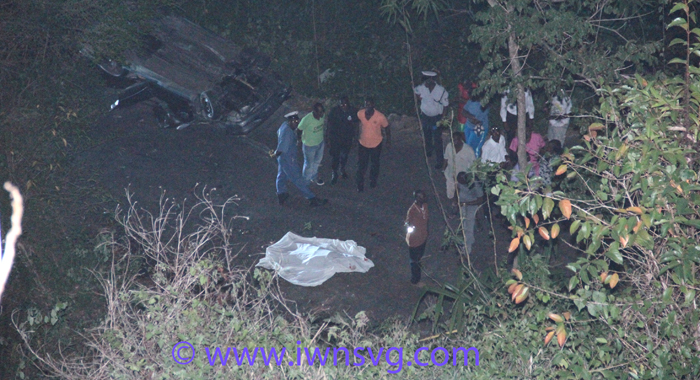 The car that plunged over a cliff in North Leeward Sunday night resulting in the deaths of three persons attempted to overtake another vehicle moments earlier, witnesses tell I-Witness News.

“A car was in front and he was trying to pass back the other car that was in front of them,” Coulls Hill resident Princess Anderson told I-Witness News Sunday night.

Police are yet to issue a statement on the tragedy, but Elson Crick, Communications Consultant in the Office of the Prime Minister said in an email to the media on Monday that the deceased are George Johnson, 89, Venola Ollivierre (also known as Icylma Johnson), 65, and Denzil Johnson, 22, all of Spring Village.

Two other persons, Kemral Williams, 24, said to be the driver of the vehicle, and Neville Charles, 45, have been hospitalised. Williams is at the Milton Cato Memorial Hospital and, and Charles at the Chateaubelair Health Centre, Crick said.

Reports are that the occupants of the car were returning to Spring Village from Chateaubelair, where they attended the funeral of a relative, Shardine Monica Johnson, who was murdered in that North Leeward town earlier this month.

Witnesses say that the car, PT505, was travelling south toward Spring Village when it plunged over the cliff, landing on the road hundreds of feet below in Troumaca Bottom.

Ann-Mary Anderson, a resident of Coulls Hill, told I-Witness News that she was sitting on a wall when the incident occurred.

She said the car attempted to overtake then stopped when it came upon the vehicle that was travelling north.

The car reversed a little then went over the embankment, she told I-Witness News.

Princess Anderson related a similar report to I-Witness News, saying, “And the car that turned over, it was behind and then like it try to overtake the car that was coming up and then it go over the bank.”

The women said they notified other villagers and rushed to the scene, where they met three persons lying in the road.

“When I go down there, I meet the boy in the road and then I meet a woman and a man by the drain side and then I tell them look somebody else in the bush,” Princess told I-Witness News.

A male died in the bushes along the bank side.

The women said they summoned the police and ambulance, which responded and transported the injured to the hospital, where one person later died.

The witnesses called on the authorities to fix the retaining wall along the road where the accident occurred, noting that a woman who had returned from Barbados for a funeral last year died when the vehicle in which she was travelling went over the same embankment.

“The road need to fix. It want [a] back wall because if they nah put back wall, them go get more death,” Ann-Mary told I-Witness News.

2 replies on “Car tried to overtake before plunging over cliff, killing 3 — witnesses”