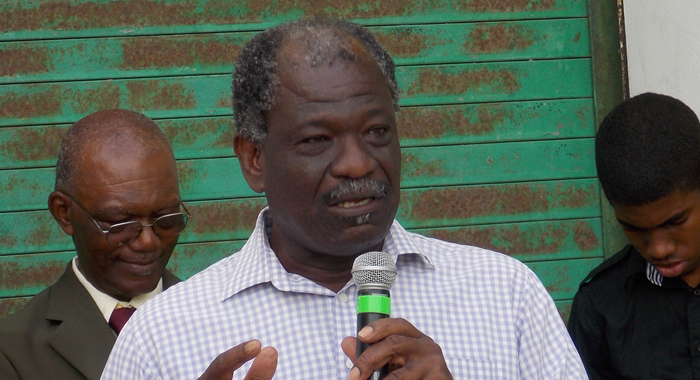 A former high-ranking member of the ruling Unity Labour Party (ULP) has suggested that the administration has created an environment in which many Vincentians feel they must pledge loyalty to the government if they are to succeed.

Queen’s Counsel lawyer Stanley K. “Stalky” John outlined what he sees as some of the unfavourable realities in St. Vincent and the Grenadines as he addressed the opening of Phoenix Chicken, a local business, on Sunday.

Phoenix Chicken, located at the right-hand side of the entrance to Little Tokyo in Kingstown, is owned by John’s client, businessman Leon “Bigger Bigs” Samuel.

Samuel has been fighting a battle with the Ralph Gonsalves-led ULP administration since February 2011, when his licence to mine aggregate on lands he owns in Rabacca was revoke.

Samuel has blamed the Cabinet-level revocation for the closing of his block-making business and, citing lack of finances, is yet to recommence operations more than six months after Cabinet rescinded the decision.

“There is some heavy load to carry. There is a lot of hard work to be done in our country to restore for Vincentians a threshold level of livelihood where the majority of us could feel proud and comfortable in our land,” John said to Leader of the Opposition Arnhim Eustace as he made his address at the opening ceremony.

“I hope that the time has come when Vincentians are settled in this perspective as I am settled. And Mr. Eustace, I hope that, like Bigger, you can count on the support, the encouragement of Vincentians from all walks of life to hold your back for you, because you are up against a very, very difficult and hard road,” he said.

John said that Samuel impressed him as being an outstanding, exceptional Vincentian.

Referring to the on-going debate about Garifunas, John said the businessman reminded him of how the indigenous Vincentians resisted the might of the British.

He said that banana earnings have fallen from EC$100 million a year to “absolutely nil”.

“Do you think that is not hitting the pocket of all and sundry?” he said, adding that tourism is also not doing very well.

“Where can the people find jobs? And those who we have elected — not me, some of you have elected and re-elected, and re-elected, and who I understand you are going to re-elect again, have a philosophy, anybody in St. Vincent, especially if he is a Garifuna, because all of us, indigenous creole Vincentians have Garifuna blood in us, identify with Garifuna culture — everyone of us, who, whether in business, in a profession or elsewhere seem to manifest some independence of mind and attitude must be brought down,” John said.

“You can only be seen to be thriving in St. Vincent if you latch on to the navel string of government that be,” he said.

He said that some people say they are concerned about the poor and underprivileged and their task is to build and uplift the country so that the poor can go forward.

“But now, those same people are the only ones we see going forward,” the prominent lawyer said.

He noted that Samuel had a multimillion-dollar business that he started because he had “belly”, and had the courage, like a true Garifuna, to go forward

“Bigger Bigs must be drawn down and thrown down,” he said in reference to the government’s attitude to Samuel’s business.

“You would think that we are building a multi-million dollar airport that require aggregate and construction material, that money is being drained from the lifeblood of our economy to get that airport built; you would think that a government that appreciates the need and who is genuine about building the people and building the economy would ensure that Vincentians who have shown the initiative and the capacity to go forward and to take the chance as bigger has taken would be encouraged and supported,” John said.

Many persons have asked why Samuel did not seek legal redress over the revocation of his mining licence.

John said that he recognised that the challenge and the action taken against Samuel “did not have a solution in the courts.

“This was not a narrow legal issue. When it’s convenient for those who’re leading our country, they speak to the broad overarching socio-economic political and economic context for what we experience from time to time.

“And one is amazed that the same people, when it doesn’t suit their political agenda, would then try to couch everything in terms of narrow legal principles and issues,” he said.

John said he sees the same thing happening in relation to Eustace’s proposal to make all Garifunas honorary citizens of St. Vincent and the Grenadines.

“I share with Bigger Bigs from day one his travails … And I see the manifestation of the whole victimization, of the anti-national approach of those who are in a position to lift our people up, exemplified in Bigger’s case. And every time I had to speak with him, my heart was heavy; I felt the pain. And bigger is only one example,” John said.

“From all walks of life in St. Vincent, people have been subjected to this form of oppression,” John said.

“Whether you are a lawyer, you are an engineer, you are an accountant, you are a businessman, you will either follow me and let all and sundry see that because you are connected to my navel string you are able to make a livelihood in this country.

“… For as long as we stand by and allow anyone, it doesn’t matter who, to perpetrate that type of philosophy and that type of public policy on us, we betray the legacy of our Garifuna ancestors.”

John said that there are persons who when they first entered politics boasted of the modesty of their circumstances, means, and material condition.

“Now, you see then flaunting wealth as if they are Donald Trump…” he said.

John, who was elected as the representative for East St. George in 1998 on a ULP ticket, has been largely silent publicly on political and national since his exit from politics in 2001 — sometime after a fallout with the party.

“I have sat for long, and I have reflected for a long time. And in a sense it was due to my disappointment, disappointment in my people; but whatever I say, whatever I do, I cannot escape what I feel in my heart, what has made me who I am,” he said.

He told the gathering that persons like Samuel and “O.T.” Mayers, a successful businessman who also spoke at Sunday’s event, and others in St. Vincent and the Grenadines “should be lifted up and put forward in St. Vincent”.

John said that like so many thousand of Vincentians, he grew up as “a little black boy” from humble parents who went to school and dreamt of being many things and in order to succeed there had to be role models.

“And in a country where you have over 90 per cent of the people looking like Bigger and OT, you need to be able to meet men like them who have done something worthy and well to be able to lift them up so that all the tens of thousands of youngsters can look at them and say one day I can become like that if I work hard; not pull them down. That cannot be right. And I ask myself Vincentians: is it only I who see this? Is that so hard for us to see? When are we going to wake up?” John said.