Little Tokyo ‘needs to be knocked down and rebuilt’ — Eustace 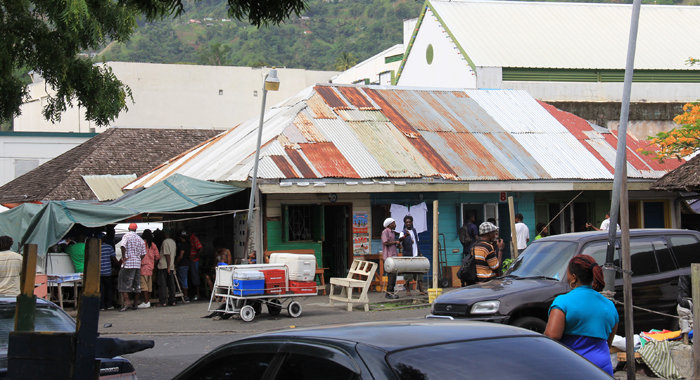 Little Tokyo, the bus terminal and commercial area in Kingstown where shops are falling apart, one can see the sky from inside the restroom, and makeshift vending stalls line the seafront, needs more than major repairs: it needs to be knocked down and rebuilt.

That was the conclusion of Leader of the Opposition Arnhim Eustace after visiting the area on Friday as part of the New Democratic Party’s “listening tour” of Kingstown.

“… the accommodation there is abominable: old pieces of canvas as a roof and quite a few people there trying to do some business in that environment,” Eustace said and spoke of a need for standards.

He told listeners to his weekly radio programme that the situation in little Tokyo “doesn’t uplift your spirit”.

“What you see is more manifestation of poverty and lack of opportunity, lack of an environment that fosters business in our economy and people are involved in all sorts of activities,” Eustace said, noting that quite a few persons conduct business in the area.

He said he visited the area of Little Tokyo where toilet facilities are.

“And that is an absolute disgrace … I could understand when somebody told me you have to use and umbrella when you’re in the toilet because of the conditions I saw there in Little Tokyo,” he said.

I-Witness News visited the area this week and the roof of the washroom is so badly deteriorated that one can see the sky from inside. Many of the toilet fitting are also broken.

“I have heard of this before but the extent of the degradation of that place is unbelievable,” Eustace said. “No administration should allow something like that to fester and remain like that for years. We are supposed to be a country not only because of our local people but because we have tourists.

“That thing needs to be knocked down and rebuilt … It’s just not tenable. That just cannot continue to exist much longer,” Eustace said.

“It’s not a matter of patching up; it is about building over. It is a disgrace to the people for this country to allow that facility to run like that.”

Eustace pointed out that that there was no economic growth for four of the last seven year.

He said that at the same time, government has not prioritised the use of limited resources, and cited the millions used to finance the “Vote Yes” referendum campaign of 2009 as an example of wastage.

“You know what that could have done since 2009 to transform Tokyo,” Eustace said, adding that that was just one instance in which such “wastage” has occurred.

“But we have our citizens accommodated in what essentially is a dump,” he said.

“It is a shame and disgrace. They are humans too. And I am calling on the government of St. Vincent and the Grenadines to do something now about the situation…

“We have no care for our citizens. This government here, to allow them to sit in that squalor day after day after day — I don’t care who get vexed, I am saying what I saw — and as a human being, as a Vincentian human being, I am ashamed of what I see — deeply ashamed, and I know better can be done and better will be done,” he said.

Eustace noted that there are rented shops at Little Tokyo.

“I don’t see how people paying rent for what they have,” he said, adding that the New Democratic Party will rebuild the facility and provide training for people who operate in that area, and clean up the general area, to rid it of the makeshift structures.

“We are not a dump and our people are not dumps. There is a minimum standard that is required and we will do everything we can to put a proper standard in place in terms of cleanliness, in terms of the general environment of the place so people can have some pride while they carry out their activities. Any Vincentian would be ashamed to be associated with that,” Eustace said.

In the Budget Address in January, Prime Minister and Minister of Finance Ralph Gonsalves said EC$1.3 million has been budgeted for “basic rehabilitative and upgrading work” at Little Tokyo).

He said resources earmarked for this activity in 2014, were redirected to the recovery after the December 2013 storm.

“Restorative work at Little Tokyo is a priority for the city in 2015,” Gonsalves said.