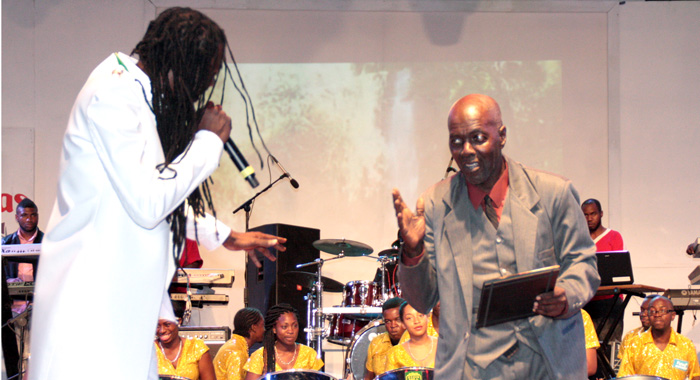 The two are “The ABC of Calypso” Alston Becket Cyrus — singer of the internationally renowned “Teaser” and the 2015 songs “Cat Balloon” and “Mo Rush”, and Kenneth “Vibrating Scakes” — who gave the nation the timeless “Our Nation is Born” in 1979 and “Dancing at 64” in 2015, one of the songs that earned him third place in the National Calypso Monarch competition.

“We need to be proud of our own and represent Vincy all the time,” Skinny said during his performance of “This Island is Mine”, a song celebrating St. Vincent that won the Ragga Soca Monarch title.

“Listen, there are some faces in St. Vincent that we need to be familiar with, and they should be called legends,” he said just before announcing the first recipients of the Living Legend Award from himself and music producer Alex “Kubiyashi” Barnwell.

“Alyo put alyo hand together for Becket. This is a living legend,” Skinny said as he presented the award to Becket.

Of Scakes, Skinny said, “This is the man responsible for writing the first Independence song in St. Vincent and the Grenadines. Give it up for Vibrating Scakes. Thank you for your contribution.”