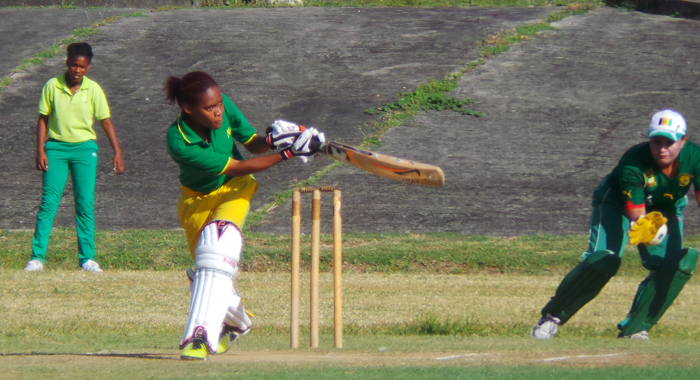 Experienced former West Indies batter Cordel Jack is part of a 13-member female squad to represent St. Vincent and the Grenadines in a three-match 50 over series in Grenada.

The matches will be played from Friday to Sunday (July 17–19).

The team were forced to make a last-minute change when first choice wicketkeeper Kayleen Garrick was excluded on the advice of doctors following a blow to the head during the team’s final training session. She was replaced by Glendeen Turtin who was named in the reserves.

The series will help determine the composition of the Southern Windward Islands team for next month’s West Indies Cricket Board (WICB) Super 50 Women’s Tournament.

Following the matches, a 14-member squad will be selected from both countries to represent Southern Windwards in the West Indies Female Tournament, scheduled for August in Trinidad and Tobago.

Jack, who has had some problems with the local cricket authorities, makes a return after a period of absence during which she is said to have contemplated retirement.

The opening batter and offspinner has been one of the country’s top-rated players and represented the West Indies in a number of matches. However, below par fitness more than a loss of form saw her losing her place in the West Indies team.

The team shows the inclusion of three newcomers in Samantha Caine and Kimone Homer, both medium pacing allrounders, and offspinner Shenezia Daniel.

The team will be captained by the experience Juliana Nero, while Stacy-Ann Adams, who was named as one of the cricketers of 2014, will be her deputy.

Nero, who captained the team last year, is one of the most internationally capped players in the team, and was part of the West Indies setup for a number of years as an opener. However, a steady decline in form resulted in the 36-year-old losing her place, and possibly bringing a closure to her international career.

St. Vincent and the Grenadines debuted at the regional level in 1999 and has been one of the top teams, having won the League, Knockout and U23 titles during their reign at the top.

Coach Cleton Burnett said that the team is well balanced with youth and experience as five of the players are still in their teens and this is a clear indication that the SVG Cricket Association is serious about rebuilding.

“We do not want the female game to fall into the situation where you are forced to continue selecting older players because there are not enough young players coming through,” he said.

Burnett said that the experience players like Jack and Nero will still be able to be an integral part of the team as they continue to contribute consistently.

Speaking on the series, the coach said that he expects SVG to win the three-match series quite convincingly but admitted that the absence of the team’s frontline wicketkeeper, who can also bat, is sure to force them to make some adjustment in their approach. He said that he will be looking to get at least 10 selections on the Southern Windwards Squad.