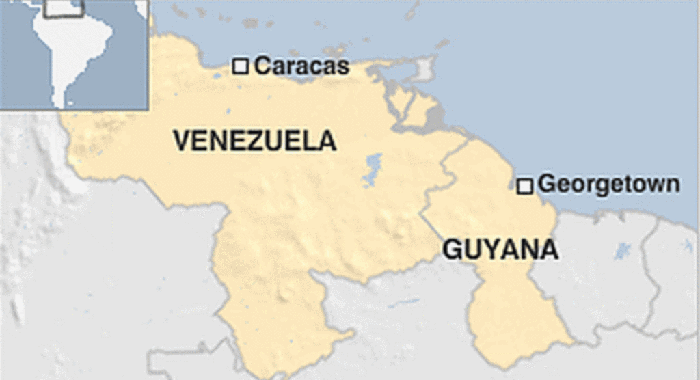 The Government of St. Vincent and the Grenadines (SVG) is seeking the assistance of the Commonwealth Secretariat to determine if any of the nation’s interest has been adversely affected by the Venezuelan decree that claims large swaths of territory currently held by Guyana.

President of Venezuela, Nicolas Maduro, issued a decree on May 26 that claims as Venezuelan territory all the Atlantic waters off the Essequibo Coast.

The purported annexation of the waters off Essequibo now takes in the oil-rich Stabroek Block, where American oil giant Exxon Mobil in May found a “significant” reserve of high quality crude oil.

ExxonMobil said the discovery was made in one of the two wells it dug in the Liza-1 drill site, which realised more than 295 feet of high-quality oil-bearing sandstone.

There were coordinates in the decree, which Guyana insisted set boundaries and affects their interest adversely.

Prime Minister Ralph Gonsalves told reporters that these coordinates conceivable affect the exclusive economic zone of other Caribbean countries and he has instructed Director of Maritime Administration David Robin to look into the development.

Gonsalves quoted Maduro as saying the decree was an administrative one which did not purport to set boundaries.

“Of course, we in CARICOM said well, if that is the case, there shouldn’t be any difficulty in Venezuela removing the offending sections of that decree,” Gonsalves said.

CARICOM, which includes Guyana and SVG, has unanimously rejected the decree.

Gonsalves said that Maduro is purported to have removed the offending section of the decree in a proclamation on July 6.

“Whether that effectively has been done has been the subject of analysis by the Government of St. Vincent and the Grenadines,” said Gonsalves, who is also Minister of National Security.

“I referred the matter to the Director of Maritime Administration and he is asked if he can get help from the Commonwealth Secretariat to see whether any interest for us has been adversely affected.

“I am not going to say to you what on the face of it it appears. I’m just saying that President Maduro, in response to what CARICOM was requesting, declared that the decree of May 26, to be null and void and superseded by this other decree, which he has issued subsequently.”

Gonsalves said CARICOM has reaffirmed its traditional support for Guyana’s territorial integrity but has also expressed a desire for all matters to be settled in accordance with international law and for a “ratcheting down” of the rhetoric.

He, however, said he recognises that both Guyana and Venezuela have their own constituencies and Maduro and President of Guyana, David Granger, have spoken on the issue.

The Prime Minister said he was hopeful that the substance of a mature relationship will be explored and consolidated.

Gonsalves, whose Unity Labour Party government has close ties with Caracas, said he is mindful that there are forces in the hemisphere and regionally who would like relations between Venezuela and CARICOM to deteriorate.

Some will like to see the relationship between Kingstown and Caracas “go to the dogs,” he said, but did not identify these “forces”

Gonsalves, however, said neither Caracas nor CARICOM wants to see the solidarity and deepening of integration be “put on the backburner”.

He also said neither Caracas nor Kingstown wants to see the beneficial relationship be undermined, in the same way that members states continue to be brothers and sister in CARICOM.

Gonsalves said the world has challenges and complication and it is important to have guiding principles.

He said he believes that SVG and CARICOM are well placed to assist in ensuring further relationship with Venezuela and resolving any problems between Caracas and Georgetown.

At the same time, however, Gonsalves said he is not calling for CARICOM to put any mechanism in place to replace the Geneva Accord, adding that he is confident that existing international conventions can be used to resolve the dispute.

“Persons may say why don’t we play a more decisive role in this matter, and I will ask them the question, ‘What decisive role? Have you studied the problem? Do you know what exist to settle?’” Gonsalves said.

One reply on “St. Vincent looking into local impact of Guyana-Venezuela border dispute”