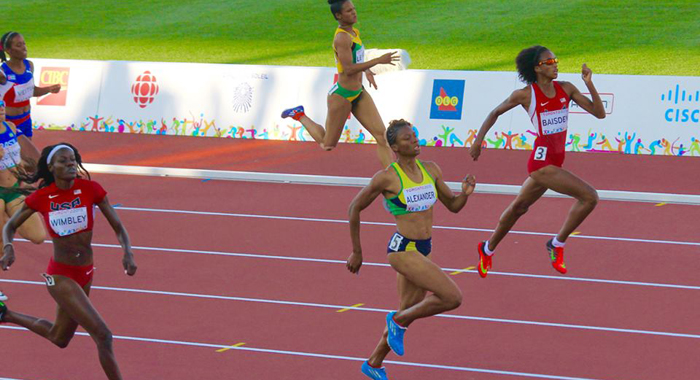 St. Vincent and the Grenadines’ “sprint queen” Kineke Alexander looked set for gold but won a bronze in the women’s 400 metres at the Pan American Games in Toronto Thursday night as the United States took the gold and silver in a late surge in the final 15 metres.

While her countrymen were still brooding over the disappointment of seeing Courtney Williams exiting the 200 metres in the first round, Alexander led the U.S. duo of Kendall Baisden and Shakima Wimbley for a major part of the distance and looked in contention for the gold but could not match the final burst from the pair of 20-year-olds.

After placing second in her semi-finals behind Baisden in a time of 52.24 seconds, Alexander went to the starting block with the hope of thousands resting on her 68-kilogramme frame and possibly in the knowledge that her tiny nation of St. Vincent and the Grenadines was under threat from the misbehaving “Kick’ em Jenny”, an underwater volcano, some 50 miles off St. Vincent that was showing heighten activity.

Her response was to put on a pyroclastic display that just came up short of blowing the dome in the final moments but was still good enough to see teammates and supporters erupt in spontaneous applause as she came home in 51.50 seconds.

It was only SVG’s second medal at the Games, which they first attended in 1991, a trip that was rife with scandal.

The first medal was won by Eswort Coombs in the men’s 400 metres when he placed third in Argentina in 1995.

In Thursday’s final, the 29-year-old Alexander looked unfazed and confident as she took up her position under starters’ orders. But she had to contend with a field of some of the best talents in female middle distance running in the region and was able to give a good account of herself.

Baisden was true to her traditional race strategy, appeared to be running well within herself until the 250-metre mark, when she trailed the powerful striding Alexander. She gained momentum coming out of the curve and was even with a group chasing the leader before she turned on her signature finish to win it in the final 20 meters in 51.27 seconds. Teammate Wimbley (51.36 seconds) just got ahead of the Vincentian who was able to stay ahead of the fast finishing Jamaican pair of Chrisaan Gordon (51.75 seconds) and Anatasia LeRoy (52.00 seconds).

It was said to be the first ever sweep of the top-two spots for Team USA, and it was only the second U.S. gold in Pan American Games history in the event.