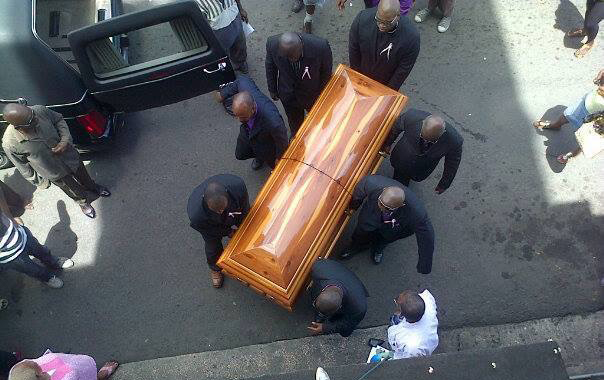 Neurosurgeon Phillip St. Louis, who cared for prominent lawyer Nicole Sylvester during the last few weeks of her life, said she had what he concluded was a “spiritual, transcendental type experience” one day before she died.

Sylvester, 51, a prominent lawyer and President of the Human Rights Association, died on July 2, two months after she suffered a stroke.

St. Louis, who performed brain surgery on Sylvester as a result of the stroke, told mourners at her funeral in Kingstown on Wednesday that he was chosen by Sylvester to explain what she experienced during the last 24 hours of her life.

He said he met Sylvester in Trinidad where she was taken for medical attention after the stroke in May.

“She was incredibly buoyant and incredibly alive and I couldn’t understand it because when I looked at the images she had, there was a huge discrepancy.

“In hindsight, when I think about that, it’s very obvious to me that this woman possessed inner strength, resolve, fortitude; just an unwillingness to give up,” the physician said.

St. Louis, however, said that the body can accommodate for so long and then it loses that ability, and shortly afterwards Sylvester’s body lost that ability to accommodate and required brain surgery.

“The surgery went well, but I was concerned because it was in a very eloquent area of her brain,” he told mourners at the Cathedral of the Assumption.

“Again, another miracle, or not really a miracle because it was Nicole — because the following day, she was up and bouncing. And I am saying to myself, ‘What is going on here? This is unbelievable. It is unprecedented.’”

Sylvester had “some minor deficits” and underwent rehabilitation, during which she was told to be careful and not do anything without assistance, St. Louis said.

The neurosurgeon said she took a trip to the bathroom and fell, but didn’t hurt herself.

She pleaded with her son, who was with her, not to call or tell the nurse “because she just wanted to be able to push; push it to the limits.

“I have not met anyone that had the perseverance, the resolve, the determination and drive, the resilience, the motivation and the aggressive approach to life that Nicole had,”St. Louis said.

St. Louis said that towards the end of May, he visited St. Vincent and became concerned the following week because Sylvester seemed more tired than usual, had some “random complaints” not related to her brain, and while her mood was good, she had lost some weight.

The neurosurgeon said some tests were arranged and on July 1 he spoke to Sylvester, who was full of life and said she had very little pain.

He said she told him that something inspired her to go onto the veranda, where she ate, and there she saw an “apparition”.

When asked what she saw, Sylvester told St. Louis that she saw the Lord and he was reaching out his hand to her.

He quoted her as saying that while she was reaching out to him, they just couldn’t touch each other.

“’But he kept smiling and he said to me that Nicole everything is going to be all right’,” Louise said, recounting the conversation he had with his patient.

St. Louis said his first reaction was the rationale, scientific one — to question whether she was on any medication that could impair her judgment, or hadn’t slept, which was not the case.

He said his second conclusion was that Sylvester’s experience had to be some type of “spiritual, transcendental type experience”.

St. Louis said he asked Sylvester how she felt and she said better than she had ever felt, at which time he asked whether her experience over the earlier weeks was depressing her.

St. Louis said he then told her that he will speak to her the following day.

“I never talked to Nicole again. I got a call … the following day saying she had passed.

“My friends, I don’t know how many of us have had this sort of experience in your lives, but certainly I have not had this type of experience. I’ve heard about it and I’ve probably read bout it. It’s like seeing the green flash at sunset. But at any rate, I bring you her message that she is at peace; she is at rest. She is content. You need not worry about her. She is with the Lord,” St. Louis said.