Eustace to paint ‘All are welcome’ onto defaced constituency office 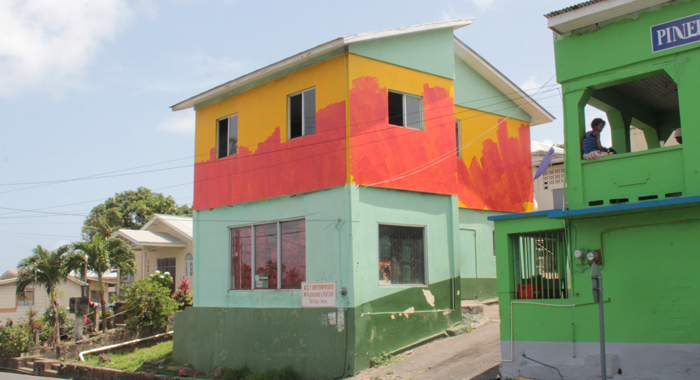 Leader of the Opposition Arnhim Eustace announced on Friday that he will not repaint in yellow his constituency office at Sion Hill, which was defaced with red paint Wednesday night.

“The only thing I am going to do, I am going to have painted on in white, onto the same red paint, ‘All are welcome’,” Eustace said on radio.

Eustace has also written to Deputy Commissioner of Police Reynold Hadaway asking that the vandalism be investigated.

“We   consider this  to be a  politically motivated   criminal   act.

“This act   of defacement  and   vandalism   must  be   investigated   so that  the   perpetrators   can   be brought  to justice,” Eustace wrote to the acting police chief.

The owner of the building, who did not want to be named in this article, told I-Witness News on Thursday that they realised that the building was defaced around 7:10 that morning.

The individual said the building had been rented to the NDP about a week earlier.

A Sion Hill resident who was there when I-Witness News visited speculated about who might have orchestrated the defacement.

“That can’t prevent Mr. Eustace from win,” she said in reference to the general elections expected later this year.

Eustace further said on radio that police investigations into the development continue.

“There was a camera located in the area. I will say no more about that,” he said.

“So while I am leaving the building as it is, whatever investigation that is necessary to find out who the perpetrators are will be done by the police with help from certain sources, because we also have some sources of information.

“So, I just want to say to the public you will have to excuse us because the building will remain as it is, defaced by whoever perpetrated this act, and as the occasion arises, we will take the necessary legal action,” Eustace said.

“I am not going to get into any particular dispute and people must see it for themselves and see what has been done,” he said.

It is the second time that NDP election-related paraphernalia has been defaced or damaged at Sion Hill in about a decade.

In the lead up to the 2005 elections, a large NDP poster at the Sion Hill Intersection was set ablaze.

“And the only thing that survived from the burning was my face. And not only my face survived, but I won the seat and the same thing will happen this time,” Eustace said.

Eustace has been representing East Kingstown since 1998, and it is the first time that he is opening a constituency office, distinct from the party’s headquarters, which is located in Murray’s Village, also in East Kingstown.

Some persons have contrasted the defacement of the building to the painting of “NDP”, supposedly by party supporters, on the Bailey bridge in Fitz Hughes ahead of its opening in June.

In a post on Facebook on Friday, Minister of Foreign Affairs, Sen. Camillo Gonsalves, said vandalising the building at Sion Hill is “a wrong, criminal act”.

“Whether the building was for private, public or political use. It should be condemned by everyone,” said Gonsalves, who is the ruling Unity Labour Party’s candidate for East St. George.

“Vandalising the bridge out leeward with political slogans on the eve of its opening was a wrong, criminal act. It should be condemned by everyone,” he also wrote.

“At the same time, the practice of setting up party or campaign offices on the same block or corner with established party or campaign offices from another political party should be avoided whenever possible, imho. When competing events are held simultaneously or political passions start to run high closer to elections, i think offices practically next door to each other is an unnecessary provocation,” Gonsalves said.

The ULP’s headquarters, located in a rented building, was opened several years after the NDP built its headquarters on Murray’s Road.