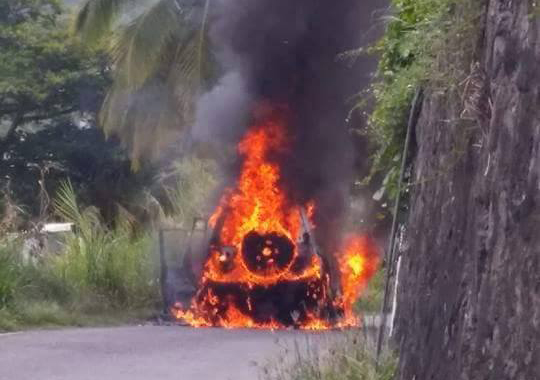 The vehicle engulfed in flames in Layou.

The four occupants of a rented sports utility vehicle escaped unhurt as it was destroyed by fire sometime after noon on Sunday.

The vehicle was travelling north when the fire occurred in the Central Leeward town of Layou.

The driver of the vehicle, a woman, and a male occupant of Barrouallie were too distressed to speak to the media after firefighters extinguished the blaze.

A corporal, the highest-ranked officer among the team of firefighters that responded from Kingstown, said he was not authorised to speak to the media.

He, however, said that none of the occupants of the vehicle was hurt as a result of the blaze.