NDP to focus first on ‘spiritual connection’ with Garifunas (+Video) 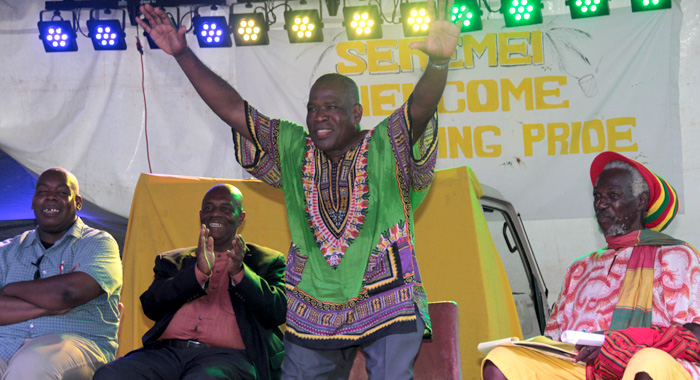 The main opposition New Democratic Party (NDP) says it will first focus on the “spiritual connection” rather than the economic benefits it says can come from its proposal to make all Garifunas honorary citizens of St. Vincent and the Grenadines (SVG).

NDP president and Leader of the Opposition, Arnhim Eustace, told a rally in Sandy Bay on Sunday that his party will first focus on getting Vincentians to accept Garifunas as their “brothers and sisters”.

The Garifunas are descendants of indigenous Vincentians who were banished from SVG more than 200 years ago but continue to see the country as their spiritual home.

“… we are saying to them welcome home, welcome home,” Eustace said at the rally that was also addressed by U.S.-based Garifuna leaders Wellington Ramos, and Joseph Guerrero, both originally of Belize.

“These are our flesh and blood representing several generations and based in several countries,” Eustace said.

He noted that 2,000 Garifunas were exiled but their population now numbers between 700,000 and 800,000 globally — seven to eight times the population of SVG.

“Most of us were not even taught in school about the Garifuna,” Eustace said, adding, “They are already part of us, but we must put that in a framework where throughout the world it is recognised.”

He said that although Garifunas regard SVG as their ancestral home, they were not recognised under colonial rule or since “our so-called independence”.

“We have ignored it for the most part,” Eustace said.

“Now, we want to take the major step of doing all we can to correct what some like to call historic wrongs.

“Well, this is the biggest historic wrong that we have and we must deal with it,” he said, adding that the NDP is committed to making the change.

“We will make that connection with our Garifuna brothers in such a way that there can be no doubt about our commitment here in St. Vincent and the Grenadines to them,” he told the gathering, adding that he has no doubt about the commitment of Garifunas to SVG.’

“We must now open our hearts and our minds to the fact that they are our brothers and sisters,” Eustace said.

He told the rally that many Garifunas many have troubles in the places were they live now.

“And I will do all I can to ensure that the process we have started here now will go on and that one day I can stand somewhere and say clearly, ‘welcome home.’”

He said that his proposal does not mean that Garifuna will come to St. Vincent and take away lands and jobs as Prime Minister Ralph Gonsalves suggested when Eustace first announced the proposal.

“That is foolishness; absolute foolishness on the part of the Prime Minister. And he knows it,” Eustace said, noting that Garifunas have families, jobs and properties where they live.