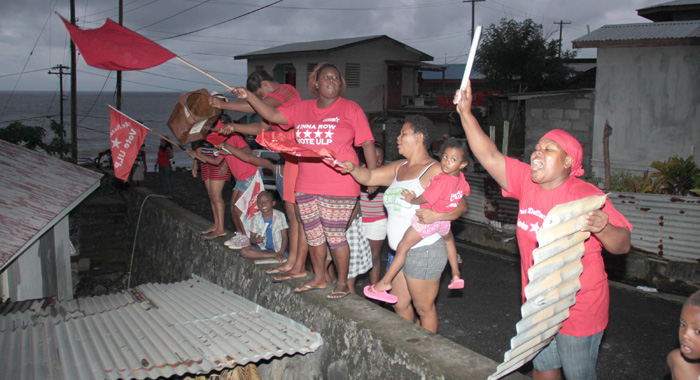 Some residents of Sandy Bay beat pieces of metal and other implements as the New Democratic Party (NDP) held a rally in the area with U.S.-based Garifuna leaders from Belize.

The rally was held as the NDP pushes ahead with its proposal to make all Garifunas honorary citizens of St. Vincent and the Grenadines (SVG) if the party wins the general elections later this year.

Some of the protesters, all of whom  were located some distance away from the location of the rally, were dressed in Unity Labour Party campaign t-shirts and shouted in support of the party.

None of them were willing to speak on camera.

Baptiste, a first-time candidate, is seeking to unseat the ULP’s Montgomery Daniel, who is seeking a fourth consecutive term in office.

Speaking at Sunday’s rally, Baptiste, a former national cricketer, said he was born in Trench Town, the area of Sandy Bay were the rally was held.

He said he practised his fast bowling on the very spot where the rally was held.