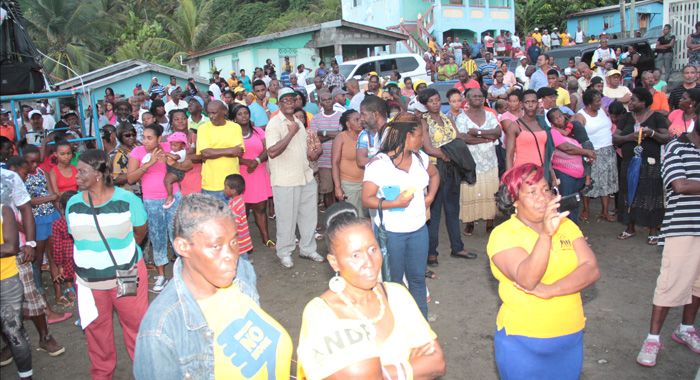 A section of the crowd at the rally on Sunday. (IWN photo)

Leader of the Opposition Arnhim Eustace says his honorary citizenship for Garifunas proposal is too serious to be entangled with regular partisan issues in St. Vincent and the Grenadines (SVG).

“This is a very serious issue. I don’t want it to get commingled with our day-to-day politics. It is far beyond that now. We want to correct a wrong that has gone on for two centuries with little done by us to deal with it, but we are going to deal with it now,” he told a rally in Sandy Bay on Sunday.

The Opposition Leader was speaking at a rally also addressed by U.S.-based Garifuna leaders professor Wellington Ramos, and Joseph Guerrero.

“All I am saying here is that if we can achieve this, our own country will be transformed,” Eustace said of the proposal first announced in May, which he said could bring significant economic benefit to SVG.

They are descendants of indigenous Vincentians and consider SVG their ancestral home.

Eustace said that with honorary citizenship for Garifunas, there will be a population, including the non-Garifuna Vincentian diaspora, of over a million people that will be “a part of” SVG, who can set up businesses and come as tourism

Eustace, however, said he wants to first focus on the “our desire to make the spiritual connection”, adding, “The economic and finance will come after.

“Our prime goal now must be to make the spiritual connection with the Garifuna, and they become part of our hearts and part of our homes. But in addition to that, I am an economist by training. I see good and great benefits from having a market of one million than having a market of 100,000. Major difference I see,” Eustace said.

He repeated his previously announced projection that if only 1.5 per cent of Garifunas visit SVG, they will contribute an additional EC$30 million to EC$40 million to the Vincentian economy.

“But we don’t have to talk about that now. What we have to deal with now is making sure that those who are trying to stop this process that we stop them. We stop them by doing the necessary.

“And it is not just love alone; we have to deal with international law. We have to deal with those areas that we feel should be covered in any arrangement with the Garifuna. And we are doing that now. I am not going to give the details of that today because we are in the process, which is going to involve lawyers and other different aspects, but we have it on board.

“We have a draft treaty already, which we are looking at. We are doing this in collaboration with our Garifuna bothers. So, I am not in for no foolishness. This is a deadly serious matter that we as Vincentians must address. Otherwise, we are not Vincentian,” Eustace said.

He said Vincentian citizenship has been given to persons because of business.

“But we don’t even want to give honorary citizenship to our own?

“I am sure that the US$48 million dollars that they say are in Swiss bank accounts from St. Vincent and the Grenadines, I am sure the Garifuna don’t have any of those. But we know who have them though.

“All I am saying this evening is that I welcome our brothers here, and we will work with them to ensure that we end with a situation where one day every Garifuna can feel a link to this country deeper than they had before, because they will be all honorary citizens of St. Vincent and the Grenadines,” Eustace said.