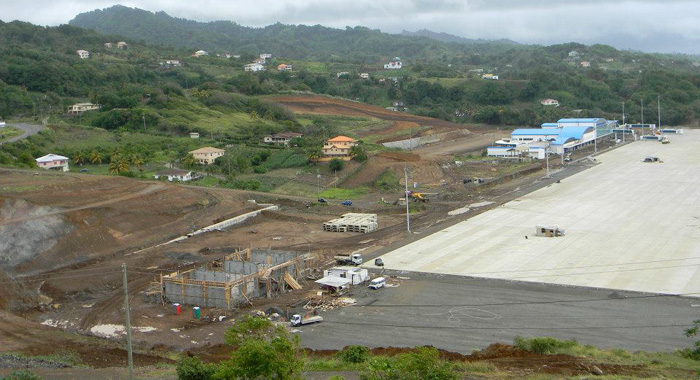 Argyle International Airport will be completed by the end of this year, more than seven years after construction began, Prime Minister Ralph Gonsalves told Parliament on Tuesday in his latest update on the project.

The airport has missed several completion targets since 2011 and the parliamentary opposition dismissed the latest date as another attempt by the government to “pull the wool over the eyes” of the electorate, months before Vincentians go to the polls.

“You can run as much as you want, but you can’t hide from it,” Member of Parliament for the Northern Grenadines Godwin Friday said after Gonsalves’ update.

“When elections come around, we will put these things to them (voters) again, and they will judge on this very poor performance of this government on their flagship project. If you can’t deliver on your flagship project, what are all the other things that are being neglected in this country, the price that we are paying?” said Friday, who headed the opposition in the absence of Opposition Leader Arnhim Eustace.

Gonsalves gave the update as he asked Parliament to permit the government to borrow a further EC$13 million to go towards the EC$700 million airport.

He said the loan was necessary because of a delay in the receipt of monies that should have come from the sale of state lands in Canouan.

Regarding the airside works, Gonsalves said the earth and site works are focused on removing the remaining hills on the airfield, preparing the sea defense walls on the northern end of the runway and creating an embankment at the southern end for the installation of a simple approach lighting system for night operations.

Pavement works on the apron, taxiway and runway are ongoing and should be completed in September, he said.

“Mr. Speaker, given some difficulties that we had at the BRAGSA plant at Rabacca in delivering all the necessary raw materials for the pavement works, that work has not been proceeding with the pace that we had anticipated. But all efforts are being put in place to have that accelerated,” Gonsalves said, adding that not a great deal of work remains.

He said Rudy Matthias, head of the International Airport Development Company, the state firm constructing the airport, has told him that he (Matthias) and Minister of State in the Ministry of Works, Sen. Julian Francis and the professional at BRAGSA and the site are making the arrangements to ensure that the material are delivered, and the planning at the works at Argyle be done in a manner that they are complete in September.”

The five tunnels to convey the Yambou River under the runway are being done concurrently with the installation of the electrical and communication conduits, and are expected to be completed in August.

Recently, the government requested the contracted firm to commence the installation and testing of the software in the control tower and the airfield navigational aids, Gonsalves said.

Regarding the landside facilities, Gonsalves said workers are installing a range of equipment and furniture in the terminal building to have it ready for operation before the end of this year.

The construction of the terminal building was completed in 2013.

The items being installed include two passenger boarding bridges, Gonsalves, said, adding that Taiwan firm Overseas Engineering and Construction Company is making the adjustment to the building to accommodate the air bridges.

Baggage handling and conveyor belts, security scanner, airline, Immigration and Customs desk and counters are also being installed in the terminal building.

He said that although the cargo terminal is not critical for the commencement of the operations of the airport, the government two months ago entered into a seven-month contract with a private firm for its construction.

Contracts have been signed for the construction of hangars.

Earlier this year, the government entered into a contract with Rubis to construct fuel farm at the airport.

Gonsalves said the company intends to complete the facility for when the airport is ready at the end of the year.

However, the company has said that if the airport is ready for operation before the fuel facility is complete, it has the capacity to deliver the fuel from Arnos Vale to Argyle, Gonsalves said.

The Prime Minister told lawmakers that construction is ongoing and in a number of cases almost complete on a number of access roads, including the main access road to the passenger terminal building.

The fencing is also moving apace, he said.

The government is setting up a state company to manage the airport, the set up and staffing of which are being done in collaboration with the Eastern Caribbean Civil Aviation Authority (ECCAA) with support from “outside,” Gonsalves said.

The government had initially intended to entrust the management of the airport to an overseas firm.

“Unfortunately, we have not been able to conclude with any of the two of three which we have been talking with for reasons not connected to us but mainly with some changes in their own countries and which have set us back,” Gonsalves said.

He said a company from “a very large world economy” is interested in getting involved.

Gonsalves also responded to comments that elements of the airport do not meet international aviation standards, saying ECCAA has been involved from the inception of the project.

“When I hear people say that the airport isn’t aligned properly, that there is this wind factor and that, I mean it is all so false and erroneous.”

He also said there was speculative talk about whether the United States Federal Aviation Administration (FAA) would approve the airport for U.S.-registered airlines.

“The point is this, it’s the Eastern Caribbean Civil Aviation Authority which approves it and it approves it within the context, the confines of the international civil aviation regulations, which the FAA also does.”

Gonsalves said the government has been in touch with the FAA on an ongoing basis.

He said several airlines have expressed ”strong interest” in adding Argyle to their routes when the airport becomes operational.

But Friday noted to lawmakers and media audience the context in which Gonsalves was giving the update.

“What we are doing here is the government has comeback to this Parliament to ask for an additional 13 million dollars to put into the construction of the Argyle International Airport and this is at a time when they had told us planes would be flying over the skies of Argyle.

“They have come for another $13 million and nothing that the Prime Minister says here today has given confidence to any member on this side of the House or anybody who has listened who would believe that what they are saying has any truth or any basis that you can rely on because the track record has been so bad, Mr. Speaker,” Friday said, adding that Vincentian voters will have to make a choice when the elections come around.

Gonsalves has said that he will call the elections this year, ahead of the March 2016 constitutional deadline.