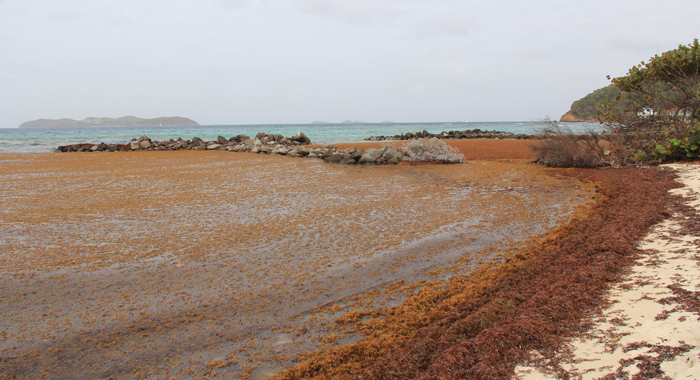 The Ministry of Health says it is taking steps to reduce the impact of sargassum seaweed on the well-being of the population and local industries such as tourism and fishing.

On Tuesday, Member of Parliament for Northern Grenadines, Godwin Friday, asked Minister of Health, Wellness and the Environment Clayton Burgin to advise the nation as to the nature of the problem, its likely duration, and what, if anything, can be done or is being done to assist persons severely affected by bad smells and gases emanating from the decomposing seaweed.

Friday noted that in recent years sargassum seaweed has become a problem in the waters and on many beaches of St. Vincent and the Grenadines creating hazards for small boats and difficult conditions for people living and working nearby from bad-smelling fumes generated by the rotting material.

He asked Burgin to state whether the situation poses any health or other dangers to the public.

Burgin told Parliament that the United States Occupational Safety and Health Administration has advised that when the smell is described as “more offensive” (3-5 parts per million) then prolonged exposure may cause effects such as nausea, tearing of the eyes, headaches and loss of sleep.

He, however, said these problems, are related to release related to industrial activities, and not for sargassum that is below the exposure limit during decomposition.

Burgin said that the national sargasum task force commissioned by Cabinet is designed to share information on the sargassum influx and to promote the adaptation of best management practices in dealing with the issue.

The taskforce has also been mandated to clear beaches and bays of sargassum, especially in areas where there is the potential for development of serious problem to local industries and ecosystems, critical industries such as fishing and tourism or even the health of citizens in adjacent communities.

Burgin said that in Owia, persons have been engaged to removed sargassum from the water and deposit it on the wharf at the Owia Fisheries Complex.

The Department of Fisheries is expected to play a role in this operation, Burgin told Parliament.

He said it has been recommended that the seaweed be left on the wharf to be washed and dried by the elements.

When the seaweed is sufficiently dried, it can be bagged and taken to the research and Development Station in Orange Hill to be turned into compost or be taken to the landfill in Diamond, he said.

The Ministry of Transport and Works will be responsible for the reinforcement of the coastline at Boat Bay, near Sandy Bay, another area that sees large deposits of sargassum.

Burgin, however, said the issue of erosion at Boat Bay is far more important than the Sargassum that is washing up on the shore.

At Big Sand in Langley Park, persons will be engaged to remove the Sargassum from the beach and deposit it into mound away from the water’s edge.

The seaweed will be washed and dried by the elements then taken to agricultural station in Orange Hill.

In Clifton, Union Island, persons will be engaged to remove the seaweed from the harbour and pile it into mounds.

However, owing to the lack of resources to process the sargassum into compost on that southern Grenadines island, it will be taken to the landfill.

“This process will be done in the areas of St. Vincent and the Grenadines most affected,” Burgin said.

Burgin said that the seaweed can be processed and used for fertilizer and compose, but added that owing to the high salt content, it will be important to wash the seaweed before it is used.

This can be done by leaving it to the elements or pumping water from rivers.

sustainable use of sargassum

The national taskforce will also   address the sustainable use of sargassum seaweed gathered from the beaches in a way that is sustainable, non-threatening to the local environment and beneficial to social and economic development of the country.

“The impact of the sargassum is such that there is need for a more comprehensive, multi-faceted, inter-agency group that can harmonise data collection, assess the impacts of Sargassum, formulate response and develop best practices and collaborate with stakeholders in the development and execution of the national response plan. The National Taskforce can probably be expanded to include more agencies and ministries, which is something that has been decided.”

He said the agencies being considered to the task force are the Ministries of Tourism, Foreign Affairs, and Finance and Economic Planning; the National Park, Rivers and Beaches Authority, the National Emergency Management Organisation; the Department of Maritime Administration; and the Roads Bridges and General Services Authority.

He said recourses are being made available to address in the process of making the environment where the seaweed is found to be more conducive to all stakeholders and Vincentians.