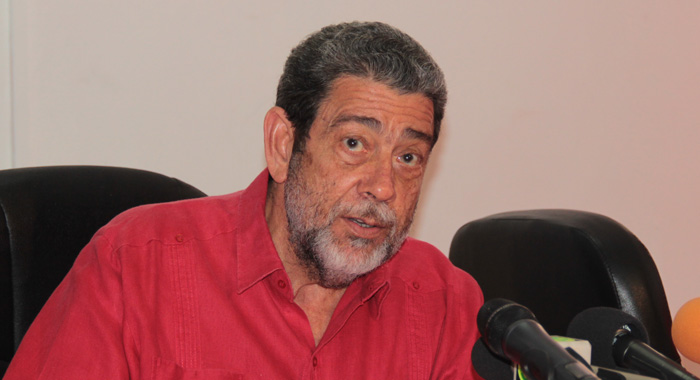 A new generation of leaders will inherit a Unity Labour Party (ULP) with a very strong majority in government when the party faces the electorate around 2020, political leader of the party, Prime Minister Ralph Gonsalves has said.

Gonsalves told reporters on Wednesday that this is one of four promises that he has made to the party, two of which have been fulfilled.

But if Gonsalves is to meet this promise, the ULP will have to buck the trend of declining popular votes since it came to office in 2001 and the loss of four seats to the main opposition New Democratic Party (NDP) in the December 2010 general elections.

He told reporters at the re-branding of the ULP’s headquarters that he had promised to leave the party more organised that every before, and this has been achieved.

Another promise was that the ULP — which was born of a merger between the St. Vincent Labour Party and the Movement for National Unity in 1994 — will have its own headquarter before the end of its third term in office.

On Wednesday, the party announced that it has purchased for EC$1.2 million the property at Murray’s Road that it had rented since 2005.

The purchase came four months after the former owner threatened to evict the party after it amassed EC$100,000 in unpaid rent over four years.

Gonsalves said the third promise he made to the party was that his generation of leadership would leave to the next generation, from 2020 onward, a party with a very strong majority in government.

“And we will achieve that in 2015 or 2016,” he said in reference to the upcoming general election.

Gonsalves has said repeatedly this year that he will call the elections this year, ahead of the March 2016 constitutional deadline, but suggested this week that he might go over into the three months’ grace period.

He said the fourth promise is that current leaders will ensure a smooth transition to their successors.

“And we ain’t going to have any confusion like yo’ had at [Victoria] Park in 2000,” he said in reference to the transition of NDP leadership from James Mitchell to current opposition leader Arnhim Eustace.

“We not going to have that confusion as what happened with the NDP. It will be done in a disciplined and organised, democratic manner, the way in which this party has built up its credibility and had shown its purpose and what it stands for,” Gonsalves said.

The ULP leader said he is confident that the party will be returned to office for a fourth consecutive term.

He also said that he has a wider lead than in August 2010 over Eustace regarding who people prefer to be prime minister.

“They (the NDP) know that because they are also doing scientific testing of the waters. And everybody knows that we have an excellent slate of candidates. Where we have had titans who are retiring, we have excellent replacements,” Gonsalves said.

Gonsalves further said that with the return out of retirement of “the terminator”, Louis Straker, Central Leeward is no longer a marginal seat.

“In many respects, because Louis is grounded in the Leeward side, this election is Straker’s election,” Gonsalves said of the man who his party called out of retirement in response to the challenge of the NDP’s Ben Exeter against the ULP’s Maxwell Charles, who the ULP has retired after just one term as MP for Central Leeward.

Gonsalves said the “ingratitude” of the NDP leadership towards their founder, Mitchell, has angered party supporters.

“And I expect that we will have a huge victory in the forthcoming elections,” he said, adding that the NDP is very worried.

Gonsalves, however, warned against complacency among ULP supporters.

“All that work is to be done — the detailed organisational work. And once on election day we have our get-out-the-vote machinery in order, there is nothing like the NDP can come close to us; nothing at all,” Gonsalves said.

He said the party has an excellent record to defend, has a good vision, and policies and programmes for the future.

Asked what gives him confidence of victory in light of the party’s declining popularity as evidenced by the election results, Gonsalves said that since 1967, Labour has been “the natural party of government in St. Vincent and the Grenadines.

He further said that the ULP is the only political party in St. Vincent and the Grenadines that has won the popular vote on four occasions.

“Those are facts, and they constitute the backdrop and the context,” Gonsalves said, even as he acknowledged the number of popular votes the party received in 2005 and 2010 fell and it lost four seats in 2010.

“But take this, in 2010, our performance was an improvement over 2009,” he said of the Constitution referendum that year in which the NDP convinced the majority of electors to vote against the proposed changes.

He said that in 2010 the NDP had the political wind to their back after the referendum vote.

“These are not mythical numbers you know, these are real numbers.

Gonsalves said he is confident that the ULP’s numbers will go up during the election campaign.

“… we are masters at campaigning and we will pull out votes in a way in which the other fellas have not yet understood.”

Gonsalves, however, denied that his government used the 2009 referendum to test his party’s popularity ahead of the general elections.

“We used the referendum in 2009 to change the Constitution, it wasn’t a thing manoeuvred for political purposes. The effort that we put into that, we could have put it in for raw, naked politics. We ran a campaign — you see people forget this: the referendum campaign was run by the government, not the ULP you know. We didn’t even have on the red. And that’s an important factor in mobilising people you know,” Gonsalves said.