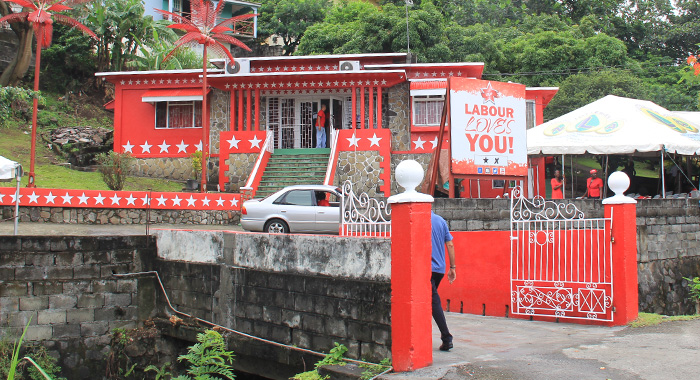 The ruling Unity Labour Party (ULP) on Wednesday showed off its rebranded headquarters at Murray Road, Kingstown, which it bought for $1.26 million, four months after receiving an eviction notice after amassing EC$100,000 in rental arrears over four years.

“This is a very proud moment for the Unity Labour Party and its members,” Prime Minister and Political Leader of the ULP Ralph Gonsalves told a press conference at the building on Wednesday.

He announced that the party paid $1,263,022.50 for the building, which General Secretary of the ULP, Sen. Julian Francis, said will be known as “Labour House”.

Gonsalves, who mortgaged his property at Frenches to help to make purchase the ULP headquarters, said that in addition to the EC$1.2 million paid for the building, the ULP paid EC$60,000 as 5 per cent stamp duty, … plus the registration fees of EC$3,022.50.

“… we have paid for this property and to register it, $1,263,022.50. You would also note that we did not make an application to the Cabinet for a waiver of stamp duty,” Gonsalves said.

He told reporters that when community organisations purchase properties, they often apply for and receive from the Cabinet a waiver of stamp duty.

In March, the former owner of the building, Lionel Coombs, gave the ULP an eviction notice after the party failed to pay rent since 2011, amassing EC$100,000 in arrears.

Gonsalves said on Wednesday that on April 21 the ULP signed with Coombs and agreement and paid EC$120,000 or 10 per cent of the purchase price.

The agreement gave the ULP 90 days to complete the purchase or lose the down payment, Gonsalves said.

He told reporters he had asked for four months, but Coombs said three months.

On July 1, the party was ready to complete the transaction and had their lawyer indicate to the Coombs’ lawyer that the ULP had the balance of the purchase price and they were ready to pay.

On July 21, Coombs signed the deed overseas, and when it was returned, the ULP’s lawyer passed the cheque to Coomb’s lawyer and the deed was registered on Aug. 5, Gonsalves said.

Gonsalves and his wife are said to have borrowed EC$590,000 to help pay for the building, which will be held in trust by Gonsalves, Francis, Sir Louis Straker and Sir Vincent Beache.

“I had promised on March 28th at Calliaqua, I promised the party at our 14th anniversary celebrations this year that within a few months we would own this property,” Gonsalves said.

“You may recall that there were some forces wanted to throw a damp squib across our celebrations for our 14th anniversary with all sorts of things surrounding this property,” Gonsalves said, adding that it was a headline across media platforms that the ULP was going to be thrown out of its headquarters.