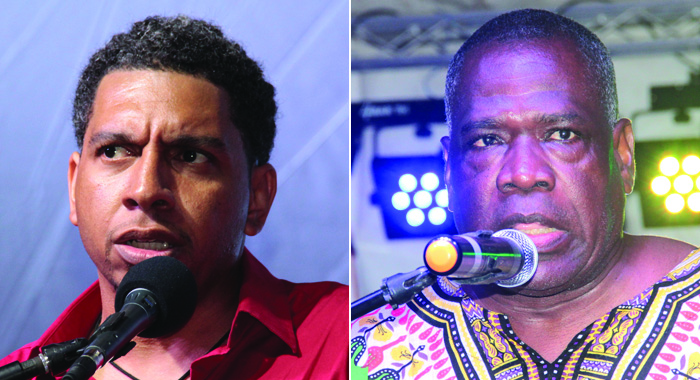 Minister of Foreign Affairs Sen. Camillo Gonsalves says he would like Leader of the Opposition Arnhim Eustace and opposition spokesperson, Sen. Vynnette Frederick to comment on the content of an email reportedly sent by U.S.-based Garifuna leader professor Wellington Ramos, alleging human rights violations in St. Vincent and the Grenadines (SVG).

The email was reportedly sent last week Thursday, some days after Ramos, who is originally from Belize, returned to the United States after a one-week visit to SVG.

Ramos was in SVG to hold talks with the main opposition New Democratic Party (NDP) — headed by Eustace, and of which Frederick is a member — about the NDP’s proposal to make all Garifuna honorary citizens of SVG if the NDP wins the next general elections.

“I would appreciate hearing from Hon. Leader of the Opposition and the Hon. Senator Fredrick on whether they received this email,” Gonsalves said in a post on Facebook on Thursday, which also included the e-mail purportedly sent by Ramos.

It was reportedly signed:

Belizean Justice of The Peace

Among the recipients of the email, Gonsalves’ post said, was Amnesty International, the Permanent Mission of Belize; the U.S. State Department Latin American Desk, and the U.S. Embassy in Barbados.

Its writer, purportedly Ramos, said he had just returned from a visit to SVG.

“I had the opportunity to speak to many of my people and they said that their human rights are still being violated in this country by this Prime Minister and his government today.”

“If the case or cases was brought against the government, the Director of Public Prosecution (DPP) would recommend that the case be dismissed due to lack of evidence,” Sen. Gonsalves’ post quoted the email as saying.

The email, according to the post, made several other claims, including about the death of political activist and former ULP supporter Edgar Cruickshank, who was killed when a car ran into an NDP rally in Clare Valley in December.

The email, Gonsalves’ post said, claimed that no investigation was conducted against the driver.

However, police have issued a statement on the incident and have brought five charges against Antwone “Qunicy” Anthony.

The email is said to have alleged that a minister of government is responsible for crimes reportedly committed against members of the opposition.

“Unlawful searches and harassment of members of the opposition New Democratic Party (NDP) is ongoing. It also occurred to me when I left the country on the 7th of July, 2015.”

Eustace has said that Ramos was searched at E.T. Joshua Airport when he left the country.

Airport officials reportedly said that his name came up in the random selection, but Eustace has said that the search was intended to “harass” Ramos.

The email is also said to have made allegations about the wellbeing of Garifuna in SVG, including a claim that they have been relieved of some of their ancestral lands.

“The people of Saint Vincent and the Grenadines are currently living in fear for their lives if they were to speak or say something against this government. They have so much fear, that they do not even want to be seen with the members of the opposition party for fear of some form of retribution by the party in government,” the email reportedly said.

“I now appeal to your agencies to conduct a thorough investigation into these allegations that to me are merited. Then, bring it to the attention of the regional and international organizations such as; Amnesty International, Human Rights Watch, Undersecretary for Latin America Affairs, Caricom, OECS, Organization of American States (OAS), United Nations (UN.,” the email reportedly said.

The communiqué reportedly referred to the upcoming general elections, saying that only the Prime Minister knows the date.

The authority to call the election is constitutionally vested in the prime minister.

In his post, Gonsalves said that if Eustace and Frederick received the email he would “appreciate hearing from them on whether they consider the claims in this email accurate and appropriate; and what response they have made to Mr. Ramos.

“Further, I would like to know if they discussed, approved or had prior knowledge of these lies and slanders being sent to the US State Department, Amnesty International and the Government of Belize,” the foreign affairs minister said.

At the time of publishing this article, I-Witness News was yet to received a response to questions sent to the address from which the email was reportedly sent.