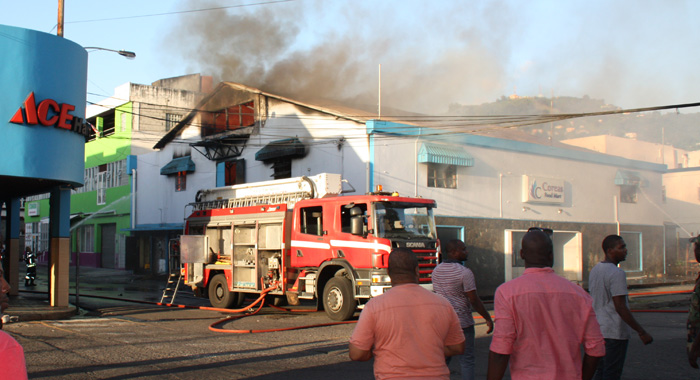 Investigators and company officials are expected to begin on Monday to investigate the cause and assess the damage and loss resulting from a fire at Coreas Mini Mart Sunday evening.

The fire, which broke out sometime around 5 p.m., gutted the interior of the building, located on Lower Bay Street, Kingstown.

Among the fire tenders responding to the fire which occurred located several hundred yards away from the Fire Department, was a fire truck stationed at the E.T. Joshua Airport in Arnos Vale.

The fire tender from the airport was called in sometime after 6 p.m., when the fire had done substantial damage to the building and its content.

One firefighter was also rushed to hospital, but her condition was not immediately known.

The firefighter was decked out with firefighting equipment, including compressed air breathing apparatus.

After the fire, persons took to social media to raise questions about the quality of the firefighting service in St. Vincent and the Grenadines.

The nation’s firefighters are now better prepared to respond to fires, having received a substantial donation of equipment, including protective wear, from Canada.

However, while persons praised the efforts of the firefighters, they also raised questions about their seeming inability to contain quickly a fire in the heart of the nation’s capital, especially one just yards away from the Fire Department.

One reply on “Coreas Mini Mart gutted by fire (+Video)”