Gonsalves says he did not set fire in Kingstown 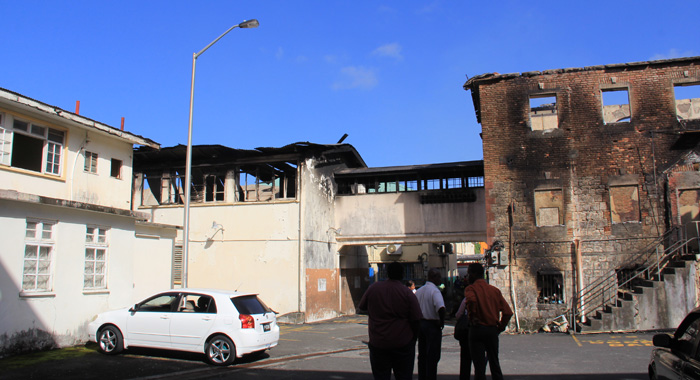 Prime Minister Ralph Gonsalves says he did not set the fire in Kingstown on Sunday that destroyed three unoccupied government Building, as some persons have claimed.

Gonsalves told Parliament on Tuesday that some persons were saying on the Internet that he set the fire.

Gonsalves’ Unity Labour Party will seek a fourth consecutive term in office in general elections constitutionally due by March 2016.

But Gonsalves has repeatedly said this year that Vincentians will vote before year-end.

The buildings gutted by fire previously housed the Electoral Office, the Government Printery and the Ministry of National Mobilisation.

“The fact of the matter, Mr. Speaker, the old Electoral Office has nothing to do with elections. The election boxes, the ballot boxes, are stored elsewhere and all the facilities for elections are at the new, updated office, which was opened some time ago, which everybody sees on Bay Street,” Gonsalves told Parliament.

“All it requires is one Internet crazy to write something like that and others follow them blindly over the hill of infamy and falsehood — the precipice of infamy and untruth,” Gonsalves told lawmakers.

Gonsalves commended the nation’s fire fighters for their efforts on Sunday, the second fire in Kingstown in a week.

On Aug. 16, a fire gutted the Coreas Mini Mart on Lower Bay Street, leaving an estimated EC$2 million in damage and loss.

Some persons have spoken about the fire trucks available to the nation’s fire fighters, noting that the ladder on the main fire tender does not seem to be operational.

Gonsalves told Parliament: “… I want to assure the country that we have been doing everything to upgrade the fire service and they have performed well here on Sunday, as in fact, Joel Providence, who is the local manager of Goddards said they performed well the week or so before when they had the fire [at Coreas Mini Mart]…” Gonsalves said.

The Fire Department is yet to comment on the blaze but Minister of State in the Ministry of Works, Sen. Julian Francis, said Monday that vagrants were living in the buildings before the blaze.

“… vagrants had invaded the buildings and the police were working on that, trying and get them out. We have no idea as yet as to what caused the fire. I believe must be a mishap by a vagrant. You know what their activities are like,” Francis said.