Emera not in talks about controlling shareholding interest in VINLEC 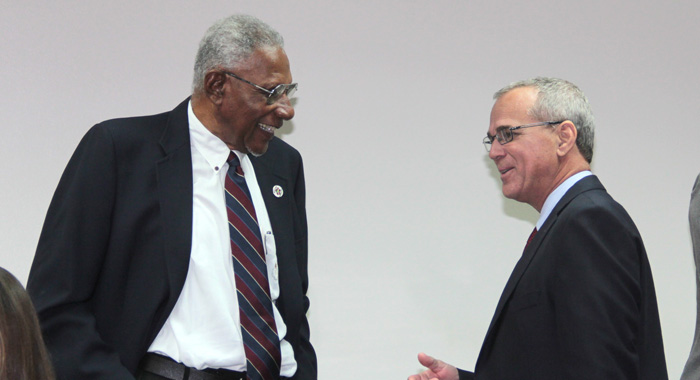 Emera (Caribbean) Incorporated (EC) has denied claims that it is in talks to acquire controlling interest in VINLEC, the state-owned and sole and sole power company in St. Vincent and the Grenadines (SVG).

Former minister of works Glenford Stewart said on radio last week that Emera and VINLEC were in talks to that effect.

But Peter Williams, managing director of Emera (Caribbean) Inc., said in a statement on Tuesday that this was not the case.

“Recent statements which have appeared in the St. Vincent media have suggested that, along with the geothermal initiative, EC is having discussions with the Government of St. Vincent and the Grenadines on the subject of acquiring a controlling shareholding interest in St. Vincent Electricity Services Limited (VINLEC).

“This is not the case and no such discussions are taking place or have taken place,” Williams said in a statement.

Emera, along with Rekjavik Geothermal, an Icelandic firm, is partnering with the government to construct a US$80 million geothermal power plant at the foot of La Soufriere Volcano.

The two private sector firms will own 75 per cent of the geothermal power plant and the government will own the remaining 25 per cent.

Williams said Emara is pleased to be partnering with the Government and people of SVG to develop a geothermal resource at the foothills of La Soufriere.

“As stated during stakeholder sessions held in St. Vincent in July, a key objective of the geothermal project is to move St. Vincent away from a dependency on imported diesel fuel to a sustainable energy path based on an indigenous, stable and affordable resource.”

He said a project of this scale requires many partners to work in close cooperation.

“In this regard, VINLEC is playing an important role in the project in meeting its duty to ensure the energy from the proposed geothermal plant is delivered to the grid in a manner that does not compromise the safety and reliability of the electricity network. VINLEC engineers are engaged and will continue to be involved in discussions regarding the transmission interconnection requirements and other technical aspects of the project,” Williams said.

He noted that the geothermal project is also receiving the support of the Clinton Foundation, which is providing the Government with independent policy and legal advice as part of the Clinton Climate Change Initiative.

“EC’s partner in the project, Reykjavik Geothermal, has a proven team of experienced geothermal experts who collectively have been responsible for projects in over 30 countries, including development of one of the world’s largest geothermal power plants in Iceland,” Williams said.

He said that the project — expected to be completed in 2018 –“continues to make steady progress and will soon be moving to the drilling phase.

“When completed, the island’s geothermal resource will position St. Vincent among the leaders in transforming the Caribbean to a green energy future,” Williams said.

Thornley Myers, chief executive officer of VINLEC, told I-Witness News last week that there were no discussions about Emera taking over controlling interest of VINLEC, saying he would have known, if that were the case.

VINLEC not for sale, CEO says