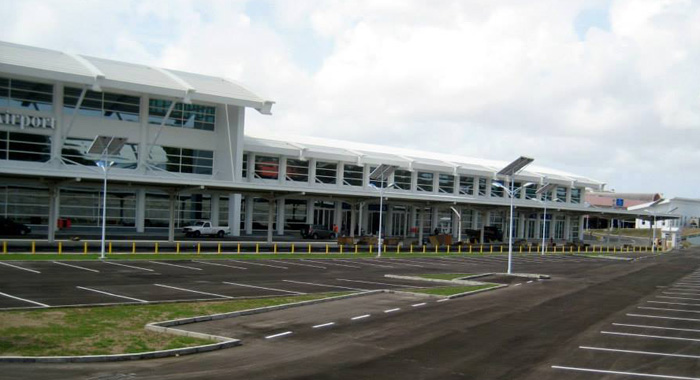 A section of the new US$98 million terminal building at V.C. Bird International Airport in Antigua. (Photo: Facebook)

Head of the International Airport Development Company (IADC), Rudy Matthias says the company uses prudently all monies it receives to build the airport, carded for completion this year.

“Every so often, we in St. Vincent and the Grenadines, we Vincentians, sometimes tend to think that great things are happening elsewhere and nothing good is happening in St. Vincent … But the truth is, the opposite is exactly the case,” he said at a ceremony where U.S.-based Vincentians donated US$10,000 to the project.

He said the IADC is building a 9,000-foot-runway airport from scratch that will cost US$224 million.

Of that amount, US$60 million is for the acquisition of the site, including compensating property owners.

This means that the IADC is actually spending US$164 million to build and retrofit the airport, said Matthias, who attended the inauguration recently of the new terminal building in Antigua.

That terminal building, he said, was built with Chinese funds and mainly with Chinese labour at a cost of US$98 million.

The terminal building that was built at Argyle cost US$37 million to construct and retrofit.

“So you can see their facilities are more than ours — in some respects, twice as many as ours. But with simple calculations, you will see that their cost is 2.6 times ours…” Matthias said.

“Now, I am not suggesting that Antigua did not get a good price for their facilities. But I just want to juxtapose what they have done with what we are going, so that Vincentians can get a good appreciation for the extent we are going to control cost in getting the good facilities we have at Argyle.

“Prudence is a word that we understand very much at Argyle and everything that we do at Argyle is to ensure that we get the best facilities at the smallest price,” he said.

Matthias said officials in Antigua say that at peak hour the terminal building in Argyle will allow them to handle 1,700 passengers comfortably.

The facility in Antigua will allow the airport to handle two million passengers a year. Argyle’s will handle 1.5 million comfortably annually.

“So we can compare them and I think when you look at the numbers carefully, you will see that we have really done at Argyle an excellent job in getting good value for money,” Matthias said.

11 replies on “Compared to Antigua, Argyle’s terminal is ‘good value for money’ – Matthias”