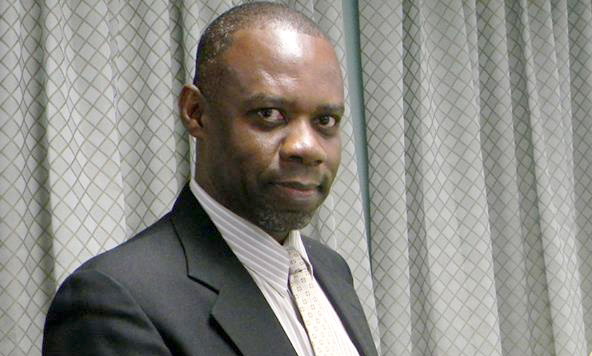 Head of the International Airport Development Company (AIDC), Rudolph “Rudy” Matthias has lashed out at the parliamentary opposition over its criticisms of the operation of the state-owned company.

Speaking on Thursday at a ceremony where U.S.-based Vincentians donated US$10,000 to the project, Matthias responded to allegations that the airport was being constructed without contractors.

The EC$700 million airport, which has been under construction for seven years, has missed completion targets annually since 2011.

It is now scheduled to open by year-end, a target that the main opposition New Democratic Party (NDP) and other observers — citing the scope of works to be done — have said the project is likely to miss.

Matthias said the IADC has to reflect on some of the criticism made of the AIDC and the government to see if they are of merit.

But he said statements in Parliament recently that there are no contractors at Argyle are not true.

He noted that the terminal building and electrical substation were constructed under contracts awarded to Overseas Engineering and Construction Company of Taiwan.

Innotech Services Ltd. from Barbados, which also won a contract in a competitive process, built the fire station, Matthias said.

Franco Construction built the base of the control tower and Innotech Services Ltd. is executing a contract to build the cargo terminal.

“So those persons who, under the cover of parliamentary privilege, would shoot off their mouth and say things like somehow Rudy Matthias is issuing contracts, underhand contracts, here and there really – in fact, I want to challenge them that if they think we are doing something wrong at Argyle, they shouldn’t say so in the house of Parliament.

“So this idea that some people seem to have that there is this superman name Rudy Matthias, who, they claim, is singlehandedly managing the Argyle International Airport, and, presumably also, singlehandedly doing everything and awarding the contracts, can’t be further from the truth,” he said.

“It is amazing that someone who professes to be an expert and a consultant on things like management will make such an outlandish statement.”

Matthias said that the IADC has a “large and distinguished board of directors”, which, with 16 members, is probably the largest in the country.

“Well, there has to be someone who speaks on behalf of the company. Well we hired a communications officer to do that and there are some issues on which I, as CEO, must speak.

“Now, if they want us — and I hate to get into politics, but if they are going to draw me into it, I might as well step in. If they want us, or if they want me to run IADC in the same disorganised way they manage the so-called NDP, I wouldn’t do that.

“We will have designated people speaking on behalf of the IADC. It will be me or Jennifer. So we are not going to have in the public domain stories about we will do this today and someone else from the party saying we will do that tomorrow.