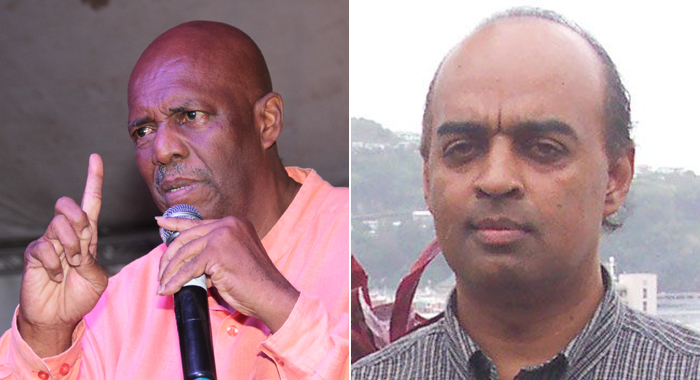 Leader of the Opposition Arnhim Eustace says he will ask the government to tell the Parliament if Desmond Morgan, husband of Attorney General Judith Jones-Morgan, has repaid EC$2.25 million that his company owned to the then state-owned, former National Commercial Bank (NCB) in 2010.

In May 2010, the High Court ordered Morgan’s company, Blue Sky Communications (SVG) Ltd. and Morgan to pay the NCB $2.251 million as repayment for loans and interest accumulated.

The loans were secured while Jones-Morgan, in her capacity as Attorney General, was a shareholder of NCB, and Morgan was chairman of the then state-owned bank.

The government sold the majority shareholding of NCB in 2010, and it was rebranded Bank of St. Vincent and the Grenadines.

Speaking at his New Democratic Party’s rally in Redemption Sharpes on Saturday, Eustace said that when the bank was sold, some members of its board owed millions of dollars in loans.

He mentioned Morgan and a   businessman “Browne”.

“So when NCB was sold, I want to know what happened to those loans. Have those loans been paid off?”

“And that special purpose vehicle was to continue to see if it could collect the money that was owing.

“But anybody ever heard about that vehicle since NCB close down?” Eustace said.

“I want to know where those loans stand right now. How much money is still owing, if any.

“But you can’t hear. Nobody want to mention it, but I am asking it in Parliament on the 17th because these things ain’t supposed to happen.”

Eustace said that he knows of someone, who, he said, was at the rally on Saturday, who has been paying his loan ever since.

“I want to hear about those with the big money. I want to hear who has paid since the NCB close down. And if they ain’t pay, what you doing about them?

“What you doing about them? Because you can’t have millions of dollars outstanding like that and then you borrowing to do other things? … It can’t work so at all and these are very serious questions that we have to deal with,” Eustace said.