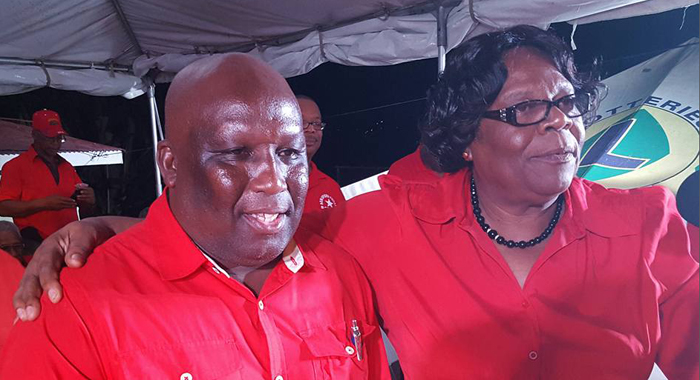 The loss of banana income in Marriaqua has resulted in hardships for farmers, the ruling Unity Labour Party’s (ULP) candidate for the constituency, St. Clair Jimmy Prince, said Sunday night.

Prince, a first-time candidate, said he was not making promises to constituents even as he outlined what he hopes to achieve if elected when Vincentians choose a new government later this year.

The former director of the Agency for Public Information, a state media entity, said that for years Marriaqua has been dubbed the valley of green gold and the breadbasket of St. Vincent and the Grenadines.

“However, recently, this industry has been met with some setbacks, namely poor markets, natural disasters, … and the general cost of production,” he told party supporters at a rally in Richland Park.

“I must admit that the loss of the banana income has caused some hardship to the bulk of our farmers,” he said.

“Because a generation has grown up to manhood by cultivating bananas, it has been the backbone of economic life in the valley. Agriculture, therefore, must remain sacred to the people of Marriaqua,” Prince said.

He told party supporters that he understands the obligations of farming.

“I’ve gone to your houses — house to house — and it is amazing how many single mothers we have farming the ground in Francois, in McMillian in Evesham, all the villages around. So we have to help them,” he said.

“One of my items on the agenda is to explore the possibility of trying to do something for agriculture in St. Vincent and the Grenadines in general, but also particularly for the people of Marriaqua.”

He said the ULP government has been trying to alleviate the hardships of farmers over the years.

Prince mentioned the European Union-financed Banana Accompanying Measures and the state-owned and funded Farmers Support Company, which, he said, has benefitted over 400 persons from Marriaqua.

“As your parliamentary rep, I shall lobby for better feeder roads, so that access to farm land will be made easier. I know the road at Montreal and McMillan are very bad, and Julian [Francis, minister of state in the Ministry of Works,] has told me … that there is a rapid road programme on the way and that will be looked after as soon as possible.”

Prince said he will explore the possibility of a centralised depot in order to ensure the quality of produce so as to fetch a better price on the regional market.

“[I will] also explore the possibility of stabilising the seemingly artificial price for produce sold outside of St. Vincent and the Grenadines. I still can’t understand how a sack of dasheen could go from 300 to 30 dollars in a week,” he said.

“I intend to work with Cabinet to strengthen measures against praedial larceny already in force. Thieving is too much of a problem in this constituency.”

He said the government will also have to look at housing and tailor something to fit Marriaqua.

A lot of people need houses in Richland Park and Glenside in particular, he said.

“We have to decide to do something about that, and we will explore those possibilities. So, roads, infrastructure, etc.”

Prince said he will continue the work that outgoing MP, Deputy Prime Minister Girylyn Miguel, is doing on the Richland Park and Cane End playing fields.

“Brothers and sister, I will try my utmost to meet your needs, having regard to the available resources, and the ambit of our possibilities as a developing nation.”

He said that in the meantime, constituents should encourage their relatives, friends and neighbours to get registered to vote.

“Be part of the forward movement. Make history. Give the Unity Labour Party and its leader a fourth term. Vote Jimmy Prince and rekindle the Marriaqua spirit. We can’t turn back now. We’ve gone too far!”

Prime Minister Ralph Gonsalves has said general elections will be held by the end of this year, ahead of the March 2016 constitutional deadline.