Opposition votes against further US$16 million loan for airport 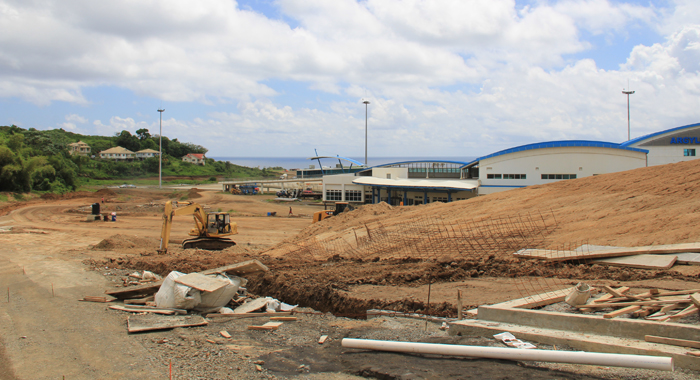 Workers construct access roads at Argyle International Airport on Monday, hours before Parliament approved a US$16 million loan for the project. (IWN photo)

Parliament on Monday voted 12 votes to six, authorising the government to borrow a further US$16 million for the EC$729 million Argyle International Airport.

It was the second loan for the project since Aug. 4, when the opposition supported a loan for US$5 million.

House leader, Prime Minister Ralph Gonsalves, asked for a division of the house as lawmakers prepared to vote around 7 p.m.

The six opposition members present voted against the bill, which the government said contains monies to assist with the financing of a contract relating to the airport and connected purposes.

He said it was “misleading” and a “misnomer” and was intended to “wrap the request in foreign clothes and to hide the agenda of the legislation before the Parliament”.

The seven-year loan is from the Export Credit Guarantee Department of the United Kingdom government, trading as UFEF

It is to be repaid in 14 semi-annual instalments, the first of which is due six months after the starting point of credit.

Interest is to be calculated using the commercial interest reference rate (CIRR) relating to dollars and published by Organisation for Economic Co-operation and Development (OECD).

To the extent that such reference rate is not ascertainable, the rate will determine and calculated by the lender on the same rate as the OECD, being the average of U.S. Treasury rate for the preceding month, plus 1 per cent, Gonsalves said.

He told lawmakers that in addition to the interest payable, there are a one-off 2 per cent arranger fee and a 1 per cent administrator fee, payable on the outstanding balance to the lender’s agent.

Gonsalves said these interest rates are “modest” in the circumstances.

Gonsalves said the US$16 million loan was provided for in the Budget that Parliament passed in January.

“Mr. Speaker, it is here in the Estimates. So when it is said that this is sprung as a surprise, it is here,” Gonsalves said.

He added: “And these Estimates were approved. All I am doing today is to satisfy the legal requisites for the payments to be made for items, which have already been purchased and received.

In June 2013, Parliament gave the government permission to borrow EC$208 million which then Minister of Works, Sen. Julian Francis said was necessary to finish the airport.

But in his rebuttal, Leacock accused Gonsalves of trying to pull the wool over the eyes of lawmakers.

“If the truth be told, Mr. Speaker, when the Honourable Prime Minister goes on to say that the funds required are here in the Estimates, there must be a very strong and potent rebuff to say that it is not,” Leacock said.

He said the movement was asking Parliament for around EC$44 million, noting that Gonsalves had said the funds are a replacement for EC$33 million identified in the Budget as project 401002 for EC$33, 480,000.

“You may argue that seven is greater than 10; I would insist that 44.5 million is far greater than 33 million dollars.

“You are in fact asking for 12 million dollars more than had been approved in that Parliament,” Leacock said.

Explaining the latest loan, Gonsalves told Parliament that over the last four years, IADC has been in negotiation with UFEF to secure export credit to acquire a range of equipment furniture and supply for the airport.

Gonsalves, who is also Minister of Finance, said the package of goods and supplies was approved in principle by UKEF.

However, it has taken more than two years for the UKEF to work out all the legal and administrative arrangements to have it available for his government to sign.

As a consequence, UKEF gave the government permission to proceed with the acquisition of certain items in the package with the understanding that IADC will be refunded when the credit is extended, Gonsalves said.

The government has said that the airport will become operational this year, after missing deadlines annually since 2011.

But the opposition has dismissed this timeline as intended to fool electors ahead of general elections, which Gonsalves has said will be held before year-end.