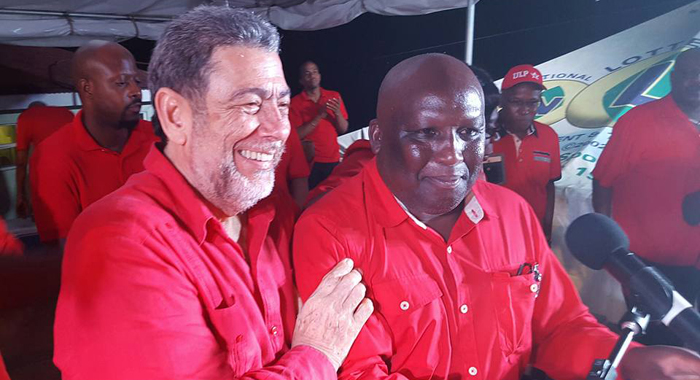 Retired director of the Agency for Public Information St. Clair Jimmy Prince has defended his decision to become a candidate for the ruling Unity Labour Party, saying it is the “greatest” political party in the country.

“There is no doubt that this is the political party which has transformed St. Vincent and the Grenadines from a sleepy, lethargic chain of islands into a modern developing state which is aggressively staking its claim in this new world order, thanks to the leadership of Ralph Gonsalves,” said Prince, a political newcomer.

He told a rally in Richland Park on Sunday that people have asked him why he is running for the ULP, which he described as “a funny question”.

“As the young people say, ‘Duh’. That’s a no-brainer. Isn’t it?” said Prince, who is also a former teacher.

“Let me tell you something: no other political organisation has done so much in such a short time in this country,” he said of the ULP, which came to office in 2001.

Prince said that no other entity has done so much for the poor, the powerless and the vulnerable.

“No other organisation has shown as much love for the nation as the Unity Labour Party. Labour loves you,” he said.

“These are facts that even the other side has to accept because there is ample evidence to support it.

“The ULP does not govern by hearsay, lies, innuendos or character assassination or the peddling of comess (gossip). The ULP employs a scientific approach and has generally raised the bar on the approach to governance in St. Vincent and the Grenadines. That is why I am running on a ULP ticket.

“I am running because I have faith in the progressive and revolutionary policies of the ULP — and me naah tun back,” he said, using a ULP election slogan.

“We have come too far in this country to allow St. Vincent and the Grenadines to slip back into the abyss from which we have taken it.”

Prince said the opposition — the New Democratic Party — is calling for a change.

“They say time for a change. That’s how they clamouring. Time for a change. Change what!? I have news for them: we are the change! The ULP is the party of change. It has transformed this country in all its dimension. That is the change we want.”

Prince said that the ULP, in its governance, has created a series of revolutions in SVG.

“I refer to them as concentric revolutions,” he told party supporters.

He said there was a time when education was only accessible to a few privileged persons, when parents had to go bawling to the Ministry of Education to get their child registered at a particular school or any school.

He said primary school teachers reached Teachers’ College and thought that was the end. “We numbered four teacher with degrees in 2001 and now, … we are probably over 500.

“That is change. That is the change we are talking about.”

The ULP turned dead capital into live capital by offering persons the opportunity to own lands on which their families had lived without title for generations, he said.

“That is revolutionary government. That is change.”

He said that years ago it was thought that the fate of people in North Windward will be determined by the existence of the Rabacca Dry River.

“The government built one bridge and caused social and economic lives to be transformed in the people of North Windward.

“Comrades, that is change.

“That is change. That is revolutionary.

“The lesson that we learn here is that even though we are small, we can dream big and achieve them even under the most dire of circumstances,” he said, adding that the airport project was undertaken under a time of global recession.

The EC$729 million airport — which has missed completion deadlines since 2011 — will be completed this year, the government has said, even as the opposition has dismissed the timeline as a political gimmick intended to woo votes.

Prince said there is a change in how the state regards the elderly and shut-in, with the Home Help for the Elderly programme.

Before the ULP came to office, victims of natural disasters were on their own, save for some handouts from charitable organisation and feeble state agencies, Prince said.

“Now, the poor victims get back their homes, their fridges, their stoves, their beds and other appliances.

“Where else in the world dat does happen,” prince said in Dialect.

“But meanwhile, the NDP is talking about it time for change. If it’s that kind of change they mean, they late; we already on the ball. We moving forward with love for people.”

He said another reason why the ULP is such an attractive entity is the leadership of Prime Minister Ralph Gonsalves.

“All we have mentioned before with respect of the achievement of this country hinges on the astute leadership of Dr. Gonsalves. He is bold, visionary, practical and highly organised.

“I know, because I have worked with him, travelled with him. He’s a crazy man.”

Prince said that people listen to the news and wonder why the global economic crisis has not affected SVG in the same way as other countries.

This, he said, is because of Gonsalves’ leadership.

“But we talk about the roads. So what? They will be fixed, but we have bigger things to deal with — the welfare of the country.

“We want to make sure that everybody can eat, that everybody works and the quality of life in St. Vincent and the Grenadines is up to measure,” Prince said.

Prince was chosen over accountant Kirk Da Silva to be the ULP’s standard-bearer in Marriaqua in the next general elections, expected by year-end.

He replaces as candidate Deputy Prime Minster and Minister of Education, Girlyn Miguel, who has been representing the constituency since 1998.

He will come up against Curtis Bowman, the candidate for the main opposition New Democratic Party, who is making his second attempt at capturing the seat.