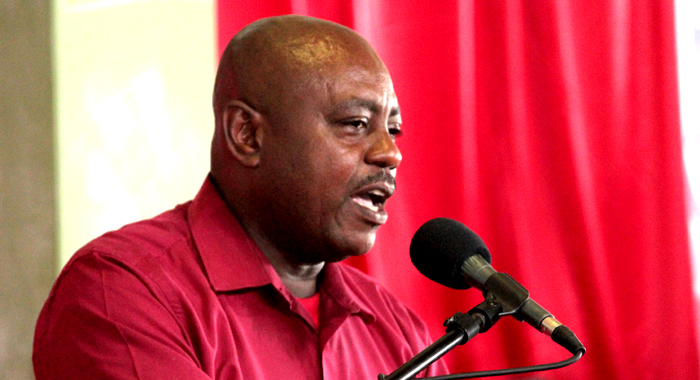 The social programmes of the ruling Unity Labour Party (ULP) have benefitted Vincentians of all ages, says Minister of National Mobilisation, Frederick Stephenson.

Speaking at his party’s rally in Richland Park, Stephenson said that when the ULP came to office in 2001, it said it wanted to do something for the youth.

He spoke of the ULP government’s Youth Empowerment Service (YES) Programme, which, he said, has benefitted over 7,000 young persons, amounting to over EC$49 million

“That is an extensive contribution o the young people of St. Vincent and the Grenadines. … This is a party of love. We love the young people,” Stephenson said, adding that the main opposition New Democratic Party (NDP) criticised the YES Programme.

He also spoke of the Home Care for the Elderly programme, an initiative under which elderly and other incapacitated persons are cared for in their homes by state workers, which he said the NDP also criticised.

“But now, when we look around and we see the treatment that the elderly have been receiving from the hands of the Unity Labour Party, they are now saying that they are going to do something. But don’t believe them. Don’t get tricked,” he said.

He also mentioned the Lives to Live Programme, under which the government builds bathrooms and water closets on the homes of the elderly poor incapacitated.

Close to 100 of those have been built across the country, Stephenson said.

He said the elderly have praised and say they will vote the government because of the initiative.

Stephenson told party supporters that when the ULP came to office,

Public Assistance — monies the government gives to poor persons under its welfare programme — was EC$60per month per recipient.

At this point, Prime Minister and minister of Finance, Ralph Gonsalves, came to the microphone and said, “And it going up from January the first by $25.”

Stephenson remarked to the crowd:

“Ahhh. Yo’ hear that? So you see, this government continued to look out for and take care of all the people in St. Vincent and the Grenadines.”

He said that schools just reopened and over 5,000 children have received uniforms and books to take them back to school for their term.

There are some 30,000 students in schools in St. Vincent and the Grenadines.

“What a government! Did you ever hear about those things in the 17 years of the NDP? Those things only came about when this government came to office in 2001. And those are the kinds of social programmes that this government has continued to shower on the people of St. Vincent and the Grenadines, and that is why you have to elect us again for a fourth term,” Stephenson said.

He said that before 2001, indigence was sky-high, but now stands at less than 3 per cent

“People are not dirt poor again. We are living comfortably well in St. Vincent and the Grenadines under 14 and a half, 15 years of the Unity Labour Party, and you must give us credit for that,” he said.

Gonsalves has said that he will call the general elections before year-end, ahead of the March 2016 constitutional deadline.