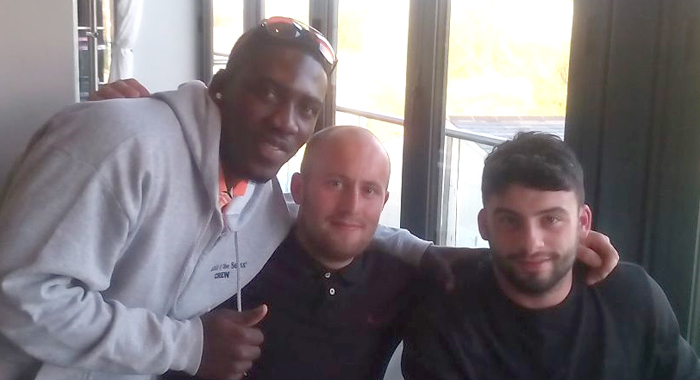 Vincentian allrounder Casmond Walters, left, and teammates in the UK.

Allrounder Casmond Walters is said to have had a productive debut season in the Bradford Cricket League in the UK, turning out for Bankfoot.

The 25-year-old top-order batsman recorded 607 runs in the 18 innings he went to the crease in the 20 matches his team played. He finished with an average of 33.72.

Walters, a right-handed attacking player, hit two centuries and four half-centuries with a highest score of 135.

He was the leading runscorer for Bankfoot who finished 8th in the 13 team League.

Walters also led the bowling with 25 wickets at just over 23 apiece.

“It was a very good season, I have to say, since it was the first time I was playing in those type of conditions,” he said.

Walters said the first part of the season was a “bit cold” but this improved in the middle when the sun came out but the chilly weather returned towards the end of the season.

He said that he had to adjust his game to some extent since the ball moved about a bit and the pitches were mostly on the slow side.

“I had to play a little later than usual and keep my eyes on the ball all the time… My teammates also helped me along by advising me what to do”.

The Team Rivals all-rounder, who had many of his victims bowled or LBW, said that he tried to bowl a full length and on the stumps.

He said that he enjoyed the season not only with the cricket but the attitude of the team members who all made him feel welcome.

In addition to playing for Bankfoot, Walters also had outings with a few other units during his four-month stay in the UK.

One such unit was ON-Q in the Quaideazam League/Asian league where he hit an even unbeaten century in the first game he played.

He helped them win the Pro Elite T20 a tournament, which, he said, saw many of Pakistan’s top players turning up to play in their off time.

“It was a really a good experience playing against some of these top players.”

He also represented Twinnies Eleven in a 25 overs aside League, which they lost in the semi-finals of the T20.

He said that tallying all his runs and wickets he could easily have exceeded 1,000 runs and over 40 wickets.

Walters said that he is looking forward to a second season, possibly with Bankfoot or any of the Clubs with whom he played this year.

He declined the chance to play for SVG in the 2015 senior Windward Islands tournament choosing instead to travel to the UK.

“It doesn’t make sense I sit on the bench here while I can go and try and develop my game,” he said of his decision.