Is Jomo Thomas a clear and present danger to SVG? 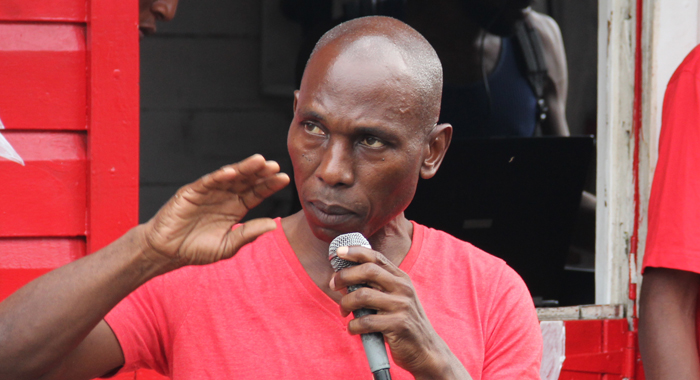 In 2009, in a televised address, Jomo Thomas said “the leaders of the ruling Unity Labour Party (ULP) are “cynical and reckless” and their actions “represent a clear and present danger” to the country.

Jomo Thomas at the time was the General Secretary of the People’s Movement for Change (PMC).

He went on to say “Vincentians should, therefore, begin to think and look beyond Prime Minister Dr. Ralph Gonsalves for leadership of the state”.

After ranting about the NDP and ULP leadership, he went on to say, “Gonsalves and his team are guilty of nothing short of political treason”.

He said “the ULP looks at all of SVG’s problems in political rather than human terms”.

Thomas said “this modus operandi hamstrings SVG and makes it harder to advance the country”.

“The ULP leadership cursed and fought with the opposition rather than fight for the unity was necessary if constitutional reform was to be successful.”

Thomas continued: “Gonsalves was prepared to deliver a constitutional reform package only on his own terms and wishes…

“This is why in the campaign for the yes vote he alienated many persons by saying, ‘This is my gift to you.’…

Gonsalves’ “sins and errors” included the wastage of millions of scarce resources..

“Gonsalves also diverted the attention and efforts of the nation away from serious task of nation-building”.

The PMC through Thomas renewed its call for Gonsalves to resign from the Office of Prime Minister of St. Vincent and the Grenadines. He said, “Your resignation will make room for rebuilding,” Thomas said, quoting a letter sent to Gonsalves.

He said, “citizens showed their disgust with the actions of politicians through the 600 spoilt ballots, twice the amount of the 2005 elections”.

“They exercised their right to vote, but refused to allow either Gonsalves or Eustace to place them in their voter bank.”

Thomas said whilst referring to the PMC: “our only desire is to place country above self and people before politics.

But all that sounded wonderful at the time, here was a tiny left wing PMC member attacking Gonsalves and he even wrote Gonsalves a letter telling him what you read above.

Later Gonsalves put him on a board or committee or two and then made him a senator.

At the time, in a letter published in the Vincentian Newspaper, one Garnet from N.Y. wrote:

“The lesson for me in all this is that Dr. Gonsalves has an uncanny ability to eventually win over anyone who seems to give him a run for his money. Jomo will now have to sing from the same song sheet as Dr. Gonsalves, regardless of how much he (Jomo) sings out of tune…

“I wonder if Jomo would be brave enough to call for Integrity legislation”. (See more)

It has often been said “everyman has his price”. It would seem to me Jomo Thomas was willing to abandon his fight for decency when at the invitation of Gonsalves he accepted a position and joined the ULP government as a senator. Now Gonsalves has him by the short and curly he has his man where he can control him.

Only in the few weeks he has shown his true colours when he repeated the phrase but changed the target player now describing Arnhim Eustace and the NDP as “a clear and present danger to St. Vincent and the Grenadines”. Isn’t that what he said about Gonsalves and the ULP? Well wasn’t it?

In the same speech, he went on to say, “The people of this country, across this land must be persuaded and convinced to say no to the NDP and yes to Ralph Gonsalves and the Unity Labour Party government”. Isn’t that a complete about turn? Didn’t he previously advise not to elect Gonsalves and the ULP?

My problem with Thomas is that he is now an official ULP candidate in the Leeward constituency of South Leeward. How on earth could anyone in that constituency support or vote for him? Because I put it to them this man just cannot be trusted because he has a pretty low price, changes horses to easily and his political views and opinions prove to be worthless.

Perhaps he is well suited to Gonsalves because Gonsalves is a self admitted liar and, using his own words against other citizens, is a “worthless dirty dog”, and Thomas just became one of his pups.

I am sure Thomas is one of those people Gonsalves will feed with a very long spoon. The other is Frank Da Silva who I have not yet worked out the price

5 replies on “Is Jomo Thomas a clear and present danger to SVG?”