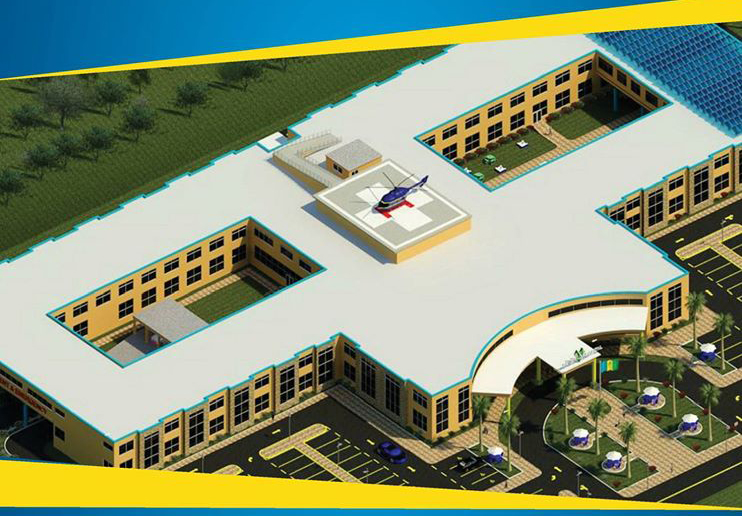 The New Democratic Party (NDP) is proposing to build in East St. George an EC$75 million hospital, which it says will offer helicopter service from distant parts of the country during emergencies.

“This is a not an airy-fairy project. This is a project that has been thought out,” MP for West Kingstown an opposition spokesperson on health, Daniel Cummings told an NDP rally in Calliaqua on Saturday.

“That is a not a joke,” Cummings said of the helicopter in the artists’ impression of the hospital.

He said that the hospital will be set up in such a way that health care professionals will determine whether visits to the accident and emergency department are genuine emergencies and deal with the real emergencies promptly.

Speaking at the same event, NDP president and Leader of the Opposition, Arnhim Eustace, said the new hospital will reduce the need for Vincentians to seek healthcare in Barbados, Trinidad or the United States.

“… we will be able to treat our people here for most of the illnesses that affect them.”

He said an NDP government will hope to attract the best doctors and medical professionals to work in the hospital.

“It will be properly equipped with all the equipment necessary, the best hospital doctors and nurses and you train people to ensure that they can assist to deliver quality service to our people — to all our people.”

Eustace said the NDP has formulated a plan for financing the national hospital   through engagements with a number of multinational agencies, particularly the European Union, from where the NDP expects to get the bulk of financing for the hospital.

He said the European Union has a rich history of assisting in the development of the healthcare sector in the Caribbean, and assisted in the construction of Milton Cato Memorial Hospital, SVG’s main health care facility.

“We have already identified special programmes, though a mixture of grants and soft loans that will help finance this significant project. We will also work through agencies such as the Pan-American Health organisation to protect technical and other assistance in setting up the hospital.

“We will also engage friendly governments in the Caribbean and Latin America,” Eustace said.

“This outgoing government has spent 14 years in office, and has never seen it fit to put its energies into the health care. Well, we are telling you tonight that the New Democratic Party will do that,” Eustace said.

He told party supporters that it is not often that a rally is held to discuss health care for the people, adding that he knows of no other instance in the Caribbean where one has been held.

“But we are concerned about this. We have seen the difficulties that people face…

“What the ULP is really saying is that we should always settle for less. That we, as a people, deserve less.

I refuse to accept that. That will never be acceptable to the incoming NDP government.