Maduro comes to SVG with vision of economic and social stability 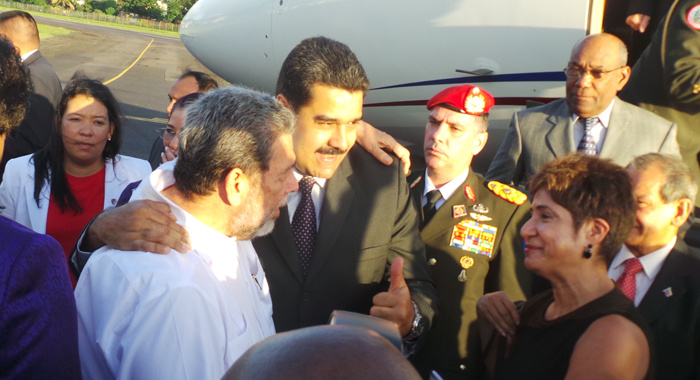 President of Venezuela, Nicolas Maduro, praised the impact of PetroCaribe on the Caribbean as he arrived in St. Vincent and the Grenadines (SVG) late Sunday evening for a one-day official visit.

Maduro said PetroCaribe, the oil alliance some Caribbean states with Venezuela to purchase fuel on conditions of preferential payment, has help to transform the region.

“When you look at the Caribbean now compared to 15 years ago, you can see that PetroCaribe was worth it,” he told reporters at E.T. Joshua Airport.

He said that the Bolivarian Alliance for the Americas (ALBA), which goes beyond oil and promote economic cooperation, and the efforts of former president of Cuba, Fidel Castro, and deceased Venezuelan leader, Hugo Chavez, were also worth it.

Maduro said he is following the path set by “Commander Chavez” and is pursuing a vision of economic and social stability in the region.

He said he hopes that the Caribbean can become an example of economic, technological, scientific and humanitarianism stability and co-existence.

“We have come to solidify the links with Ralph and the People of St. Vincent and the Grenadines,” Maduro said.

The South American leader is slated to visit the Hugo Chavez storage facility at Lowmans Bay and the construction site of the Argyle International Airport Monday morning.

He is also scheduled to give a press conference at the Argyle International Airport at 11:30 a.m. then hold a bilateral meeting with Prime Minister Ralph Gonsalves, at the office of the Prime Minister in Kingstown at 12:40 p.m. before departing the country at 4:30 p.m.

The Hugo Chavez Fuel Storage and Distribution Plant at Lowmans Bay, near to the Lowmans Bay Power Station, is a joint venture between the governments of SVG and Venezuela and was constructed at a total cost of US$31.6 million under Caracas’ oil initiative, PetroCaribe.

The facility has a combined storage capacity of 34,000 barrels of fuel, enough to generate electricity for three months, and increased the nation’s fuel storage four-fold when it was commissioned in April.

Loans from PetroCaribe are helping to pay for the construction of the EC$729 million international airport at Argyle, which the government says will be completed by year-end, after missing completion targets annually since 2011.

While Caracas has provided loans for the project, it has not lived up to a promise that Gonsalves has said former Venezuela president Hugo Chavez made to pay the salaries of Cuban professionals helping to build the airport.

However, some political observers say the trips are an attempt to drum up support within CARICOM amidst the on-going border dispute between Venezuela and Guyana, a CARICOM nation.

During a visit to St. Lucia on Oct. 17, Maduro called for the creation of a high-level commission between Castries and Caracas.

He said that body will spearhead events for the 2017 commemoration of the bicentennial of the martyrdom of Caribbean and Latin American patriot Jean Baptiste Bideau.

On Sept. 24, Maduro visited St. Kitts and Nevis and storm-ravaged Dominica carrying messages of solidarity and offers of support.