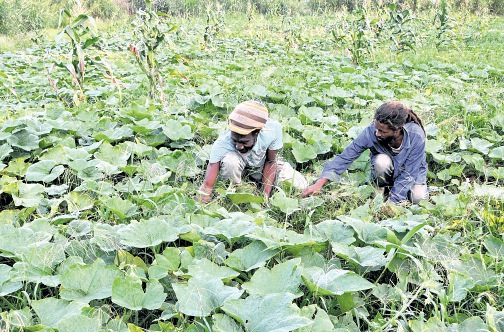 Farmers tend to a field of pumpkin and other crops in Jamaica. (Photo: Jamaica Observer).

BRIDGETOWN, Barbados (CMC) — The population of the Caribbean Community (CARICOM) live in fear of the potentially catastrophic impact on agriculture of the next climate event in the region, amidst the continued struggle to reduce the ever-increasing five billion (US) dollar food import bill.

The region spends more than US$900 million on importing wheat, maize and derived products including US$455 million on chicken, pork, beef and mutton.

But commodities such as rice and sugar, both of which are produced in the region, account for US$88 million and US$191 million respectively of the food import bill.

A further US$171 million worth of fisheries products, including dried, frozen and smoked food, is imported into the region, which has vast marine resources.

But despite these staggering figures, the region is making efforts to reduce the food import bill and is focusing on commodities that CARICOM says are priorities, namely roots and root tubers, small ruminants, herbs and spices, and fisheries.

The United Nations Food and Agriculture Organisation (FAO) has determined that cassava, a tuber grown widely across the region, has the potential to replace up to 50 per cent, or 400,000 metric tonnes, of wheaten flour in CARICOM.

It can also substitute up to 40 per cent of the corn in poultry rations without adverse effects, as well as a portion of other animal feeds.

Further, CARICOM officials believe that cassava can be more widely consumed as a healthy, staple food, and, on its own, can address about 5 per cent of the region’s food import bill.

Stewart said the region has to be focused on areas where it can make “early and significant impact, as it seeks to reduce food imports.

Staples, including wheat, rice, and white potatoes have the most potential to curb the drain on already scarce foreign exchange and there been some progress with the inclusion of flour from cassava, plantain, and sweet potato in bakery products.

“So we now have the capacity to replace up to 40 per cent of the wheat in our bakery items, including our regular bread,” Stewart said, adding that Caribbean nationals are already accustomed to the taste of these tubers

CABA has also been focusing on the fast food sector, where there is the potential to replace white potato fries with fries from plantain, sweet potatoes and cassava.

Stewart said the initiative has already seen successes in Trinidad and Tobago and is expanding its efforts to other CARICOM countries.

“And what we are seeking to do now is to get the productive levels up so that the cost of these regional items is not inconsistent with what the consumers are prepared to pay.”

But any discussion about food security and agriculture in the region must take into account the very pronounced impact of climate change, evidenced by extended drought and unseasonal heavy rains and floods.

Experts say that if left unchecked, climate-related natural disasters could result in losses estimated at US$22 billion annually by 2050 in the Caribbean, a region characterised by small, open and vulnerable economies.

Climate change has already left an estimated US$136 billion in loss and damage throughout the region during the period 1990 and 2008, according to the Inter-American Development Bank.

“This means basically that the Caribbean region can be taken back 20-30 years because of the issue of climate change,” says Juan M. Cheaz Pelaez, senior programme coordinator for Agricultural Policy and Value Chains at the Technical Centre for Agricultural and Rural Cooperation (CTA).

He told CMC that climate events have resulted in economic, social, infrastructural and environmental damage. But the agricultural sector has been severely affected,

“One (climate-related) phenomenon can do away with many livelihoods. … It’s very relevant to the Caribbean and to having an economy in general that is resilient and agriculture that is resilient,” Cheaz said as he outlines the severity of the impact of climate change on Caribbean farmers.

CARICOM has tasked its agricultural agency, the Trinidad-based Caribbean Agricultural Research & Development Institute (CARDI), with helping to insulate its food security efforts against the vagaries of climate change.

“For example, in those countries where there is a lack of water or there is inadequate water for irrigation, CARDI will be focusing on varieties that are more adaptable to those climates,” Stewart said, noting that the Caribbean is susceptible to the impact of hurricanes annually.

“And in selecting our varieties, we are looking at those that are able to regenerate quickly in cases where we have significant damage by hurricane.

“So, if we look at our root crops, cassava can withstand that kind of external damage; sweet potato, similarly. These are crops that are short term, so in the case of major natural disaster, we can regenerate very quickly,” Stewart explains.

The Caribbean-Pacific Agri-Food Forum helped stakeholders to make further progress towards better agriculture-nutrition links and multi-sector collaboration leading to people owning their own nutrition agenda, and resilient communities and climate-smart agricultural practices and policies in the face of climate change.

At the policy level, the region has woken up to the reality of climate change.

She notes the devastating impact of Tropical Storm Erika which claimed 30 lives and left hundreds of millions in damage in Dominica in August, and the death and destruction that a trough system left in its wake when it passed through St. Vincent and the Grenadines and St. Lucia in December 2013.

“We are being killed, we are inundated, we are losing access to very important resources on the back of tropical storms, not even hurricanes. And we expect more of the same,” she told CMC.

The chief coordinator of the Caribbean Farmers Network (CaFAN), Jethro Greene, says farmers have been taking action on their own to deal with climate change.

For example, farmers growing dasheen on hillsides have begun to plant then in holes rather than on furrows, in an effort to combat erosion from uncharacteristically heavy and frequent rains. They are also using better drainage to cope with excess rainfall, and using metrological information.

“We, in CaFAN, are taking another view. We are saying is climate change and climate variation is going to be with us, we have to see what opportunities it offers, and not just as a problem,” Greene told CMC.

“For example, we know now that the concept of cheap food is a thing of the past because of the variation and in terms of climate, etc.

“We are seeing food prices getting higher and higher. Therefore, we also now have a weapon to encourage our governments to create the relevant policies for greater emphasis on food and nutrition security in our borders,” he added.

In the conversation, stakeholders are mindful that individual and collective action in the Caribbean to mitigate against and adapt to climate change is important. But they are also mindful of the big picture, and the world climate change summit in Paris in December.

SIDS says that world leaders must agree on a climate accord that will keep global temperature rise to less than 2 degrees Celsius higher than pre-industrialisation levels if the most vulnerable nations, such as those in the Caribbean, are to be spared the brunt of the impact of climate change — which they are already experiencing.

Greene says that if action is not taken, climate change will result in more floods and droughts, and in situations where there are food shortages, countries will stop exporting.

“So it gives us a weapon, an important tool in our hand now,” he said, adding that that is why agriculture is at the top of the agenda at many institutions, including the EU, whose Technical Centre for Agricultural and Rural Cooperation (CTA), was a major partner in organising the interviews that were given.

“If something is with you, it has to be turned into a factor of usefulness, and that is our thinking. So we are going to reverse now and we are going use climate change for our benefit.”

CaFAN, which groups 5,000 small farmers in 16 countries, is formulating a position paper about “the specific needs of small farmers in vulnerable small island states” to present to Commonwealth heads of government and at the global climate change talks in Paris — COP21.

“Don’t lump us in with these chemical crazy farmers all over the world, but understand that we small farmers need to be given credit and even financial rewards for our job, the small farmers, because of our intercropping systems, the friendly environment system, in being a plus for climate change matters,” Greene said.

3 replies on “FEATURE: Amid fears generated by climate change, Caribbean agriculture plods on”