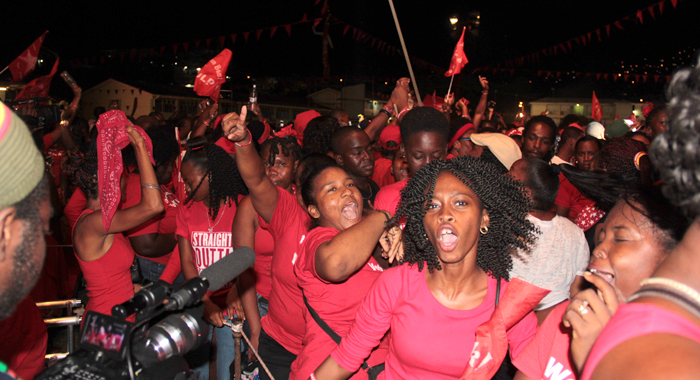 A poll commissioned by the Unity Labour Party has found that the party is out front ahead of next Wednesday’s election. (IWN photo)

Vincentians will elect a new government on Dec. 9.

Prime Minister Ralph Gonsalves announced the election date in front of a large crowd of supporters of the ruling Unity Labour Party (ULP) in Kingstown on Saturday.

He told the gathering at the Grammar School Playing, where he also announced the election date in 2005, that his party has not been perfect but is refreshing and renewing for another term.

“David, who had blood on his hands, was a man after God’s own heart,” Gonsalves said.

“And if Paul, the greatest evangelist, would have persecuted Christians and became the greatest advocate for Christianity, I say to those in the NDP, ordinary supporters, that they look to the ULP and come to us because we have a message of hope and love and of faith for this country.”

Gonsalves said his party’s policies and programme have benefitted the nation, and listed 20 of them, which he said has transformed St. Vincent and the Grenadines (SVG).

He also outlined the “15 stars” — policy areas — on which his government will focus if returned to office.

The star is the symbol of the ULP and Gonsalves said each policy represents a candidate.

There are 15 constituencies in SVG.

Parliament had already been dissolved when Gonsalves began delivering his speech Saturday night, he later said, adding that Nomination Day will Nov. 20.

Political observers have said that the elections will be a tight race, as the ULP, which holds a one-seat majority in 15-member Parliament, seeks to hold on to the reins of power.

The main opposition New Democratic Party (NDP), which holds the remaining seven electoral seats, is expected to present the biggest challenge to the ULP.

Political observers say that SVG Green Party, which gained just 0.2 per cent of the votes in 2010, and the fledgling, 3-year-old Democratic Republican Party, are unlikely to have any impact on the outcome of the vote.

The ULP is seeking a fourth term amidst declining support in each successive election since it was first elected in 2001.

The party was swept into office in March 2001 in early elections called after political unrest one year earlier.

In that poll, voters overwhelmingly rejected the NDP, which had been in office for 17 years.

However, the ULP did not take the reins of power having won seven seats to the NDP’s eight in a country that uses the first past the post electoral system.

In 2005, the ULP was returned to office by the same margin of seats as 2001, but again entered the nation’s history books as securing a second term with a smaller share of the popular votes than in the first term.

The ULP saw both its number of popular votes and parliamentary seats fall in 2010, although it secured a third term in office.

The NDP, on the other hand, saw the number of popular votes it received in 2010 jumping 5.9 per cent to 50.4 per cent, capturing four additional seats in the process.

8 replies on “December 9 is election day in St. Vincent”